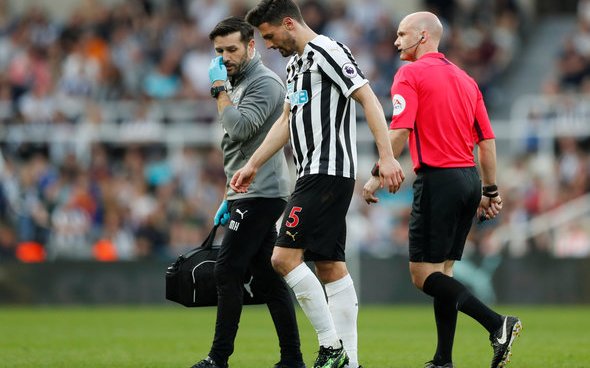 The Sky Sports reporter for the North East revealed that the Switzerland international remains upbeat about the knee injury that forced him out of the recent 1-1 draw with Wolves at St James’ Park on Sunday.

Downie shared the news that Schar will most likely miss the game at the London Stadium on Saturday on his personal Twitter account after interviewing the 27-year-old on Wednesday.

Schar has started nine Premier League games under Steve Bruce so far this season, with Jamaal Lascelles the only defender to have featured more for the Magpies.

There is no arguing the fact that Schar is a massive miss for the Magpies when absent from the squad. The Swiss enforcer has been the standout performer for Newcastle this season, averaging a 6.97 WhoScored match rating – the highest in the entire squad Bruce has put together. As the game carried on against Wolves on Sunday, the more gaps continued to appear in between the likes of Ciaran Clark and Federico Fernandez, and Newcastle would have been a lot more comfortable with Schar in the heart of their back five. Florian Lejeune returned on Monday for the under-23s and could be an option for the game against West Ham, so Bruce has numerous options available to him to replace the influential Swiss, but every single Newcastle fan would much prefer having Schar available to them in the future. The 27-year-old being upbeat could mean that it won’t be long till he returns, with the clash against West Ham possibly being just a little too early.