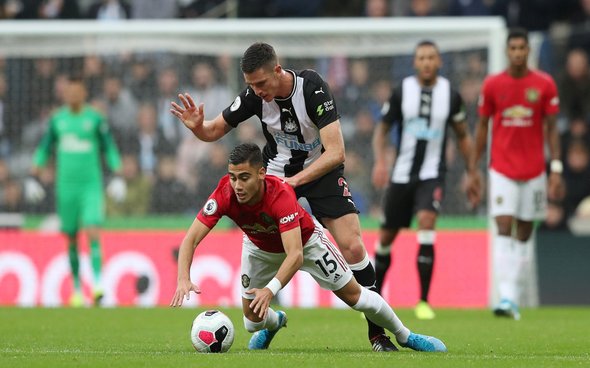 Newcastle United defender Fabian Schar has admitted that he was very impressed by Ciaran Clark in the 1-0 victory against Manchester United.

The Switzerland international shared his delight for the 30-year-old, who came back into the side against the Red Devils after spending an extended period on the sideline at St James’ Park.

Steve Bruce handed Clark his first appearance in the Premier League this season, after he failed to make much of an impact under Rafael Benitez in the previous campaign, only making nine starts for the Magpies.

“For Ciaran when he didn’t play before, he came in and played a great game so I’m really happy for him,” he said on the club’s official Twitter account.

“He showed what he can [do] and for all the other players, I’m really happy. They did a good job.”

Bruce made the decision to make a handful of changes for the Manchester United clash and got the perfect response from his side after their thrashing against Leicester City in the game beforehand. Clark came in with youngster Matty Longstaff, and both played a pivotal part in securing the three points at St James’ Park. The Republic of Ireland international was solid alongside Schar all afternoon and didn’t put a foot wrong in the heart of the defence. Ole Gunnar Solskjaer’s side didn’t have many opportunities in the game, mainly down to the defensive resilience of Newcastle, with Clark making two interceptions, and a couple of clearances according to WhoScored – more than captain Jamaal Lascelles in both departments, as he helped silence Man United’s attack all afternoon. Clark had the desired impact Bruce will have been hoping for when selecting him, and that should all but certainly see him keep his spot against Chelsea on Saturday.