The reporter knows the 25-year-old well, and he feels that he is being mismanaged and played out of position by Magpies head coach Steve Bruce.

“For some in the States, they feel sorry and actually want to get him back at Atlanta,” he told the Shields Gazette. “After seeing the way he’s been playing and the way the team has been dysfunctional, in a way they feel sorry that he’s been wasted at Newcastle and feel it’s ruining his career by making the jump to such a club.

“In Paraguay, it’s a similar story given how useful he is as the national team’s most important player.”

It’s not hard to say why regular viewers of Major League Soccer and the Paraguayan national team may feel that Almiron is having his career wasted in the north east. There’s no doubt that losing Rafael Benitez, the man who lobbied so hard to bring him to the club, has hurt the player. Meanwhile, Bruce’s insistence on playing him on the right hand side of midfield, rather than on the left – as he did under Benitez – or as a number 10 – as he did for Atlanta – has clearly negatively affected his performance. All you have to do is look at the statistics from last season compared to this one to see how far he has declined. As per WhoScored.com, the Paraguay international is down in a host of major offensive statistical categories from what he achieved after his January move last time out. Almiron’s shots per game tally is down from 1.9 to 1.1 per game, while his key passes have plummeted from 1.3 an outing to just 0.4. He’s also being caught offside more and surrendering possession far more often. Some blame has to go on the player, of course, but he’s not being helped by Bruce either. 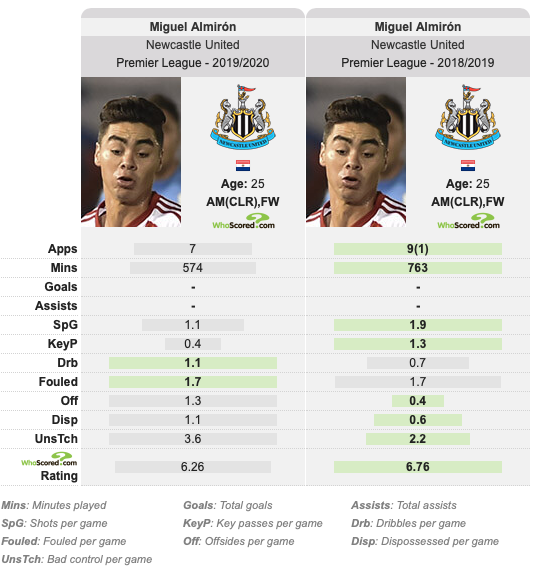