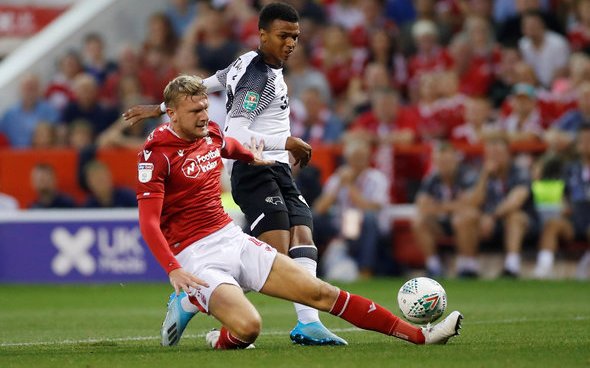 Joe Worrall has been one of the outstanding centre-backs in the Championship this season and Nottingham Forest fans owe a lot to the defender for their side being second in the table as it stands.

However when a young player performs well in the second-tier, it is never going to be too long before a club from the Premier League starts to become interested in a transfer.

Newcastle United were linked with a move for Worrall, 22, over the weekend.

The Sun reported that Steve Bruce had become interested in the former Rangers loanee in a bid to bolster his defensive unit in the January transfer window following a poor start to the season.

Newcastle’s defence has not been great this term.

Although the 13 goals conceded after eight Premier League games is the same as Rafa Benitez’s record last season, the 5-0 drubbing at the hands of Leicester and the 3-1 defeat at Norwich have led to serious questions being asked about Bruce’s back-line and it would seem that he sees Worrall as a potential answer.

Worrall has been in great form at the City Ground.

Forest have conceded just nine goals in 11 Championship fixtures and only Leeds United [seven] can boast a better defensive record.

Worrall’s tag as being a no-nonsense defender is certainly backed up by the fact that, according to WhoScored, he has averaged 5.5 clearances per league game this season, which ranks him fourth in the second-tier out of centre-backs with eight or more appearances.

The Nottingham-born defender has also blocked 1.4 shots per match this term and no other centre-back in the Championship can boast a better figure than that.

Forest legend Kenny Burns has been especially impressed by Worrall’s form this season.

The two-time European Cup winner appears to be concerned by this interest too as he has recently claimed that the 6ft 3 defender should be handed a new deal in a bid to keep him at the City Ground for as long as possible.

“Joe Worrall’s performances so far this season for Nottingham Forest have been nothing short of fantastic,” Burns said on the Nottingham Post website.

“They’ve been so good in fact, that he should be rewarded with a new contract at the City Ground to warn off any potential interest in him.”

One point that Burns has made about Worrall is his loyalty to Nottingham Forest.

Worrall was born in the East Midlands city and is a boyhood supporter of the Championship club having risen through the ranks of their academy to become a first-team regular.

Although he spent last season on loan at Scottish Premiership giants Rangers, there has been little suggestion from the centre-back that he wants to pack his bags and quit Forest any time soon.

Burns believes that Worrall is a special breed of footballer, claiming that the defender shows a loyalty that is seen rarely in the game these days.

“There seems to be little loyalty in football these days, but with Worrall, he’s a lad that genuinely loves Nottingham and playing for the club he supports,” the Forest legend added.

“In that sense, he reminds me a bit of Jack Grealish at Aston Villa.

“Just desperate to succeed at the club he loves, and I respect that attitude – it’s hard not to find it refreshing – living the dream as he says himself.”

Worrall could be Newcastle’s new Jamaal Lascelles. Not only would he come from Nottingham Forest but as seen in Burns’ comments, the 22-year-old is someone who is a superb professional with a great attitude towards the game.

If a Premier League side comes knocking for a Championship player then it’s bound to be tough for someone like Worrall to say no to playing alongside Lascelles, in the top-flight and perhaps earning more money.

St James’ Park could have itself a new fan favourite if a deal for the Forest ace happened in January.