Steve Bruce could be forced into one change for Newcastle United’s clash against Wolves at St James’ Park on Sunday.

According to the Chronicle, centre-back Fabian Schar is likely to miss the upcoming Premier League fixture after he suffered a knock in the 1-0 defeat away at Chelsea last week.

It was reported that either Federico Fernandez or Paul Dummett could replace Schar, 27, in the heart of the defence.

Fernandez, 30, seems more likely be the man to come in and earn his first league start of the season due to him being right-footed.

The Argentine has only earned three Premier League appearances since Bruce took charge in the summer and all three of those have been as a substitute, amassing to just 23 minutes’ worth of game-time.

However it is predicted that Fernandez will come in and start against Wolves on Sunday, just because he is a more natural replacement for Schar than the left-footed Dummett. 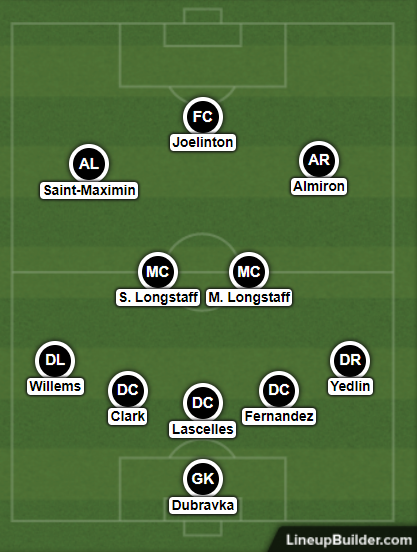 Martin Dubravka signed a new six-year deal on Thursday and is expected to start in goals.

In front of him could be a back-three of Fernandez, Jamaal Lascelles and Ciaran Clark, with DeAndre Yedlin and Jetro Willems lining up as the two wing-backs.

Sean and Matty Longstaff are both predicted to keep hold of their spots in the centre of the midfield as Isaac Hayden serves the final match of his three-game suspension.

Bruce might stick to his guns when it comes to his attack with Miguel Almiron and Allan Saint-Maximin both starting in support of centre-forward Joelinton after it was reported by the Chronicle that Andy Carroll is injured and unable to replace the misfiring Brazilian.