Newcastle must step up Osimhen hunt

There’s no arguing with the fact that a lack of goals, a symptom of a lack of creativity, has been Newcastle United’s biggest problem so far this season.

The Magpies have actually been fairly decent defensively – the disaster at Leicester City notwithstanding – but they have looked absolutely barren in front of goal.

Club record signing Joelinton hasn’t panned out as of yet, and so it comes as no surprise that the north east giants are thought to be interested in signing Lille’s next attacking sensation Victor Osimhen.

However, French publication Top Mercato reported on Monday that the Ligue 1 outfit will attempt to block any January sale of the 20-year-old and keep him with them until the end of the season.

Given how bad Newcastle have been in front of goal this term, scoring just five goals in nine Premier League games to date, the club need to launch a monster bid for Osimhen come the winter transfer window to test Lille’s resolve.

We know they have the money given the Joelinton outlay, and this is a top class talent who they can’t afford to miss out on. Plus, at just 20 years of age this is someone who they could pair with the former Hoffenheim man for the next decade.

Right now, though, the Nigerian is way ahead of the Newcastle man. As per WhoScored.com, he has scored seven goals this campaign to Joelinton’s one, while he is averaging higher totals in shots per game, as well as being fouled more often, and dispossessed less frequently. Plus, his average WhoScored rating is 7.37 to Joelinton’s 6.54.

He’s a quality operator who could make a big difference to the Magpies’ season. They need to come in for Osimhen in a big way in January to see if they can prise him away from Christophe Galtier’s side. 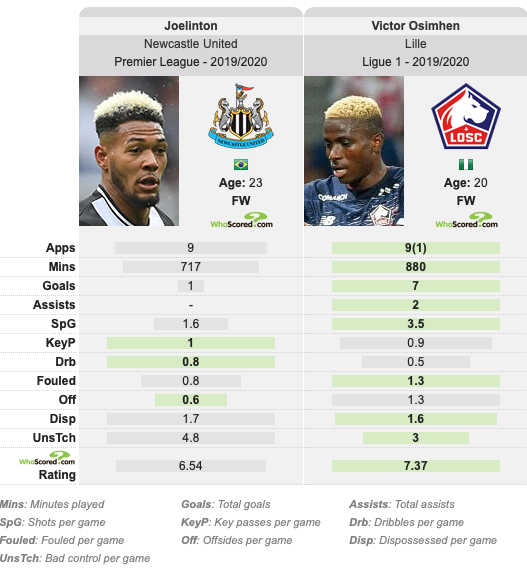