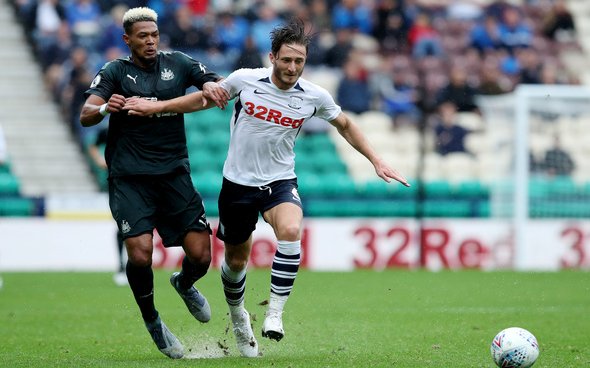 Newcastle United are in the hunt to sign Preston centre-back Ben Davies but face competition from three of their Premier League rivals, according to the Sun.

The newspaper claims that Brighton are currently leading the race to sign the 24-year-old defender but Everton and Wolves are also interested amid Preston’s strong start to the Championship season which sees them sit third in the table.

It is understood that Brighton are plotting an offer to sign Davies in January, with the Barrow-born defender valued at £10million by Preston.

The Sun adds that North End do want to keep hold of Davies at Deepdale and are planning to offer him a new deal despite worries about the lure of Premier League football.

Preston have enjoyed a superb start to the season and Davies has been a mainstay of Alex Neil’s side by completing every minute of every league game, including the 5-1 win against Barnsley on Saturday. Preston are the leading goalscorers in the Championship and their defensive is not among the best in the league, but they have still conceded fewer than current leaders West Brom. As a result of Preston’s expansive style of play, Davies is not among the leading centre-backs in the Championship for the number of tackles he’s made per game. According to WhoScored, Davies has averaged 0.5 tackles, 0.9 interceptions and 3.9 clearances per appearances in the second-tier this term. In comparison, Leeds’ Ben White has averaged 2.4 tackles per game and leads the way for centre-backs in the Championship with over five appearances while White also leads the way in interceptions [3.3]. There are better centre-backs in the Championship than Davies and Newcastle may not really even need a new centre-back in January either with Steve Bruce already well-stocked in that area of the squad. If he’s going to spend £10million on a player in January, it should go towards a top-class creative midfielder.