Newcastle United’s start to the season has been an absolutely harrowing one for everyone concerned with the club, but it could be about to get much worse.

That’s because star midfielder – and homegrown talent – Sean Longstaff could soon be whisked away from the beleaguered Magpies, at least according to the latest reports.

The Daily Star claimed on Tuesday that Manchester United chief executive Ed Woodward is plotting a January move for the 21-year-old. The Red Devils are said to have enquired about the youngster in the summer, but were put off by Newcastle’s £55million price tag.

However, Woodward believes the dysfunction at St James’ Park could work to his advantage, and is now confident of getting a £40million deal done in the winter transfer window.

This is news that will surely have the Toon Army hiding behind their sofas. They were aghast at the possibility of losing Longstaff in the summer, but mid-season could prove to be even worse.

However, the statistics suggest that the young midfielder hasn’t been at his best so far this term. He’s struggled with injury problems, but he has certainly been outplayed by teammate Isaac Hayden, at least.

As per WhoScored.com, he’s averaging fewer shots per game this campaign than Hayden and fellow midfielder Jonjo Shelvey, despite the former being a typically defensive-minded player.

Then there’s dribbles per game, where Longstaff’s tally of 0.2 is fewer than any of Hayden, Shelvey and Ki Sung-yueng. However, his one key pass per outing is second only to Shelvey out of that group.

So there is room for improvement if he is to get back to his previous level, although it would be difficult for any player to shine in this Magpies side. Even so, the local lad leaving for Old Trafford in the middle of the season would represent a disaster for Steve Bruce’s team. 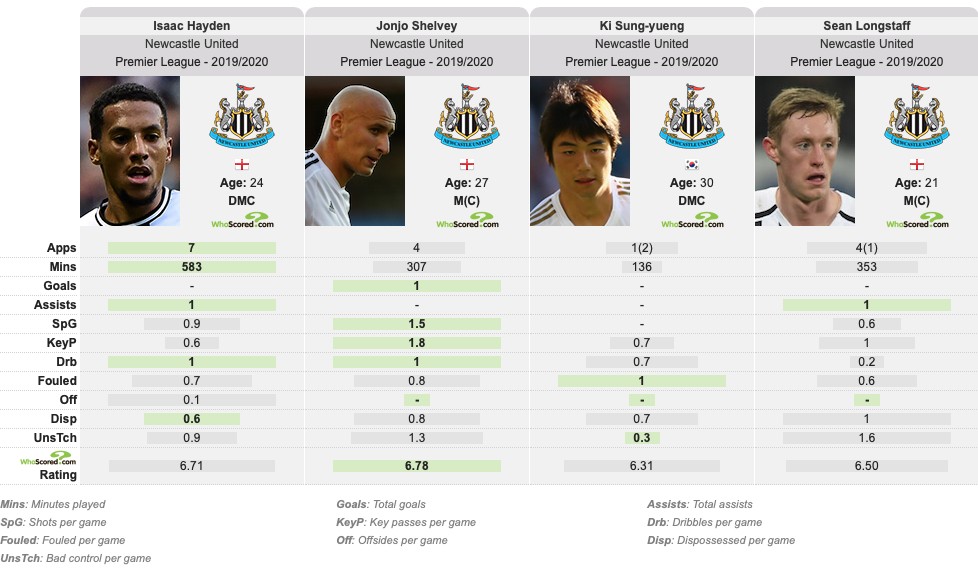