You can’t blame Newcastle United fans for being a little bit sceptical every time a new transfer rumour emerges about their side. After all, following years of Mike Ashley’s tenure as owner, they have had their hopes dashed several times before. Moreover, when they do go big on a new signing, it doesn’t always go to plan. Record signing Joelinton has just the one goal so far this season, while January’s big purchase, Miguel Almiron, has still yet to register a goal or an assist in a black and white shirt. And so, you can’t blame some supporters for being a little standoffish when it comes to a new report from The Chronicle linking the Toon Army to Lille striker Victor Osimhen. The 20-year-old has been in fine form so far this season, hitting eight goals in 12 appearances since joining the French side over the summer, at a rate of 3.5 shots per game, as per Whoscored. While some fans are excited by that prospect, others have pointed out that a new striker is probably not the first thing that Steve Bruce should be looking to snap up. You can’t help feeling that they might be right. After all, this Toon Army side have the second lowest amount of passes and crosses in the Premier League so far this season, as per the league themselves. It’s fairly clear that the problem isn’t who’s up front, but rather that they’re getting no service. 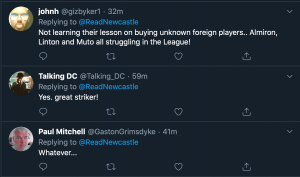