Newcastle United fans have reacted in a somewhat mixed manner to a report that the club is keen on re-signing defender Lewis Gibson from Everton next year. According to the Daily Mail, Peter Beardsley’s exit from St James’ Park has led to Gibson, 19, becoming interested in a return to Tyneside, two years since leaving for Everton in a deal worth £6million. However the defender’s contract expires next summer and that means a return to Newcastle is on the cards. Newcastle fans do not seem to be sure what to think. Gibson has failed to break into the first-team at Goodison Park, leading to one fan saying he’s heard the youngster is “not rated”. Everton are a team that has been through constant change for several years now. They cannot seem to stabilise in the Premier League and are constantly changing managers, which does not help young, up-and-coming players like Gibson. He is still someone that a Premier League club paid £6million to sign and if he is available on a free transfer next year, Newcastle should just sign him because there’s virtually no risk at all. It could be a masterstroke.

Couldn’t make it up

Gibson was highly-rated while at #nufc and it was disappointing to see him go in 2017. With the crop of you British talent coming through – the Longstaffs, Woodman and potentially a few more in next few years (Bailey and Wilson) – it’s great to see.https://t.co/KURA2ZjCli

This would either seem unlikely or that Everton have cooled on him that much despite paying £6m which should be a major red flag. 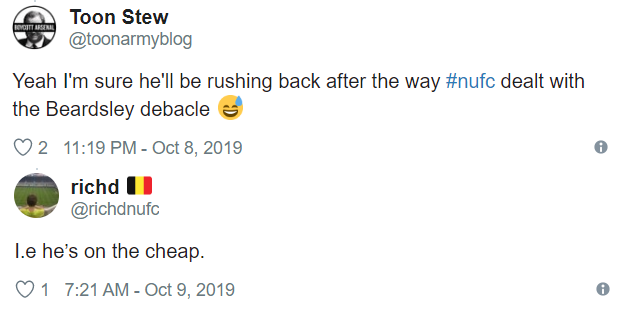