Dwight Gayle made his first appearance of the season for Newcastle United on Saturday when he came off the bench in the 85th minute of the 1-0 defeat to Chelsea at Stamford Bridge. It was not an awful performance by Newcastle and it was a result that a lot of people expected against Frank Lampard’s in-form side. However some fans are getting twitchy over the lack of goals from the Magpies and even though Gayle, 28, failed to have a single touch of the ball in his cameo at Stamford Bridge [WhoScored], there are some supporters who want the ex-Crystal Palace striker to start up front for them. Joelinton has struggled for goals, hitting the net just once since his arrival from Hoffenheim in the summer. Salomon Rondon took his time to start scoring regularly, so maybe people need to be more patient with Joelinton? Gayle has not played a lot of football since the end of his loan spell at West Brom last season, so it could be a huge risk to start him next week over a fully fit Joelinton.

How Christian Atsu gets in the squad is absolutely mind boggling. The guy is frightened of his own shadow!
Gayle needs a start/more game time.
Almiron desperate for a goal. #NUFC

Really are likeable lads and there was some real effort, but I don’t see the goals not his team unless Dwight Gayle finds a purple patch. He starts for me next week. The smash it high at the big man thing doesn’t work. #nufc.

I just hope that with the return of Gayle to fitness (still needs more time I know) that we start to see more of a goal threat soon. We are yet to score more than one goal in a game this season. :/ #nufc 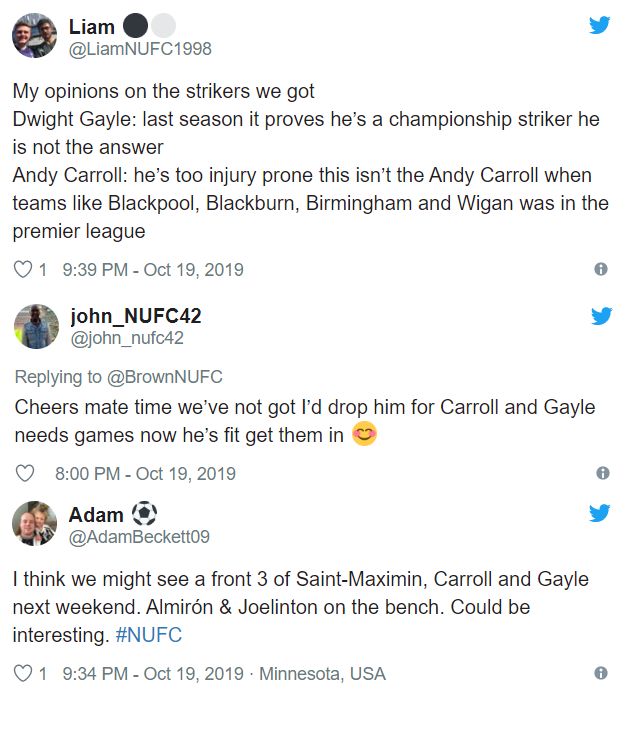