Newcastle United head coach Steve Bruce would be well advised to switch up his formation slightly for his team’s clash with West Ham United on Saturday.

The Magpies head into the game on the back of a 1-1 draw with Wolverhampton Wanderers last time out, but are without star midfielder Sean Longstaff after his sending off at St James’ Park.

However, Isaac Hayden is back from suspension and so he must replace the Englishman. Meanwhile, Javier Manquillo and Dwight Gayle must come in for DeAndre Yedlin and Miguel Almiron. That would see a switch to a 5-2-1-2 formation.

Those three changes would likely be enough for the Magpies to potentially outdo a West Ham team who are without a win in five games in all competitions.

Martin Dubravka is the main man between the sticks for Newcastle and, despite his clanger against Wolves, he is almost certain to keep his place in goal.

At right wing back, Manquillo should replace Yedlin. The Spaniard seems to be perpetually underrated by his managers, but is far more reliable than the American. On the opposite side of the defence, meanwhile, Jetro Willems must start once again here.

The central defensive trio should absolutely stay where they are after a battling effort against Wolves. Federico Fernandez really impressed, while Jamaal Lascelles and Ciaran Clark must start as well.

While the older Longstaff is suspended, the younger one is still very much in the fray. Matty should start alongside the returning Hayden in the middle of the park.

Then, Frenchman Allan Saint-Maximin should move slightly infield, playing as a number 10 behind the front two of Dwight Gayle and club record signing Joelinton. Almiron has been woeful this term and needs to move to the bench, while Gayle’s predatory instincts should help Newcastle and bring the best out of Joelinton. 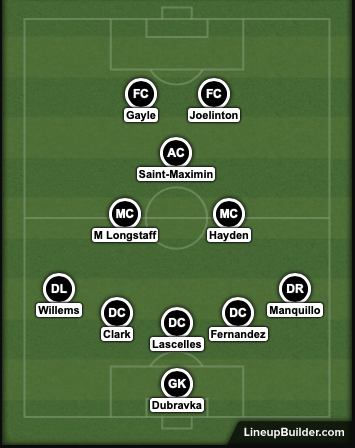