Neville: Saint-Maximin doesn’t know what he’s going to do next 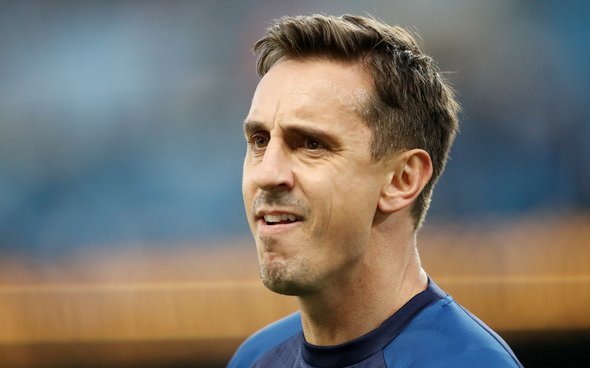 Gary Neville has admitted that Allan Saint-Maximin would be a very difficult attacker to defend against after the Newcastle United winger caused all sorts of problems for Manchester United on Sunday.

Saint-Maximin, 22, made his second start of the season for the Magpies in their 1-0 win against Man United at St James’ Park and managed to impress those who watched him for his ability on the ball.

The former Nice attacker, who was signed by Steve Bruce in the summer but has struggled with injuries during his settling-in period, caused issues for Ole Gunnar Solskjaer’s defenders and Neville has touched on why that is the case.

“He’s one of them,” said Neville during commentary on Sky Sports Main Event on Sunday [05:04pm].

“Their legs are going everywhere, their arms are moving. The ball’s not shifted yet.

“They’re hard to play against. They give you a difficult time.”

Saint-Maximin ran Man United ragged on Sunday. According to stats by WhoScored, the French forward completed four dribbles before he was substituted off by Bruce in the 83rd minute and no other player on the pitch managed to complete as many. Saint-Maximin attempted seven dribbles and when you look at Man United’s players, the player who attempted the most for them was Daniel James, who attempted just three. Saint-Maximin’s ability to dribble past players is down to this lack of predictablity about him that Neville has touched on. While it would be harsh to say that the Frenchman bamboozles defenders because he isn’t sure himself what he’s going to do next, it’s certainly something that helped him against Man United right-back Diogo Dalot on Sunday. Dalot barely stood a chance against Saint-Maximin. It will be interesting to see how more accomplished full-backs deal with the Magpies forward as the season progresses.