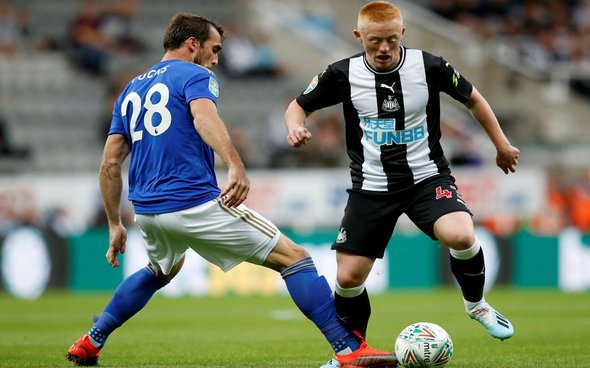 The game against Leicester City couldn’t have gone much worse for Newcastle United and Steve Bruce.

The Magpies’ boss was left fuming with his squad after the 5-0 defeat at the King Power Stadium on Sunday and he has been reported by the Chronicle to be preparing a number of changes for the game against Manchester United.

It wasn’t only the result that would have given Bruce sleepless nights, but the first-half red card picked up by Isaac Hayden could have given him a real selection headache going forward.

The Newcastle midfield is seriously lacking options in the coming weeks, with Hayden out through suspension and Jonjo Shelvey still sidelined through injury.

Bruce confirmed in his pre-match press conference before the Leicester game, as quoted on the club’s official Twitter account, that Shelvey had picked up a hamstring problem and will be out for two weeks.

That leaves the Magpies with Matty Longstaff and Ki Sung-yueng as their only options to replace the suspended Hayden for the game against the Red Devils on Sunday.

Bruce could hand a Premier League debut to Longstaff which would see him partner his brother, Sean, in the heart of midfield.

Newcastle will need tenacity and determination in defence against Man United to disrupt their flow, and Longstaff would be able to offer more of that than Ki would.

The Korean international has struggled in his 136 minutes of football this season, only averaging 0.3 tackles per game according to WhoScored, with Newcastle needing to be stronger in defence.

Bruce confirmed to the Shields Gazette that he wanted to hand the 19-year-old his debut at Liverpool earlier in the season, but an injury to Fabian Schar prevented him from doing so.

Now could be the opportunity that Longstaff has been crying out for, and Bruce should give him the chance to impress on debut as he looks to make an impact on the first-team.

The Magpies’ starlet could ease the midfield headache potentially facing Bruce against the Red Devils by making his Premier League debut at St James’ Park.