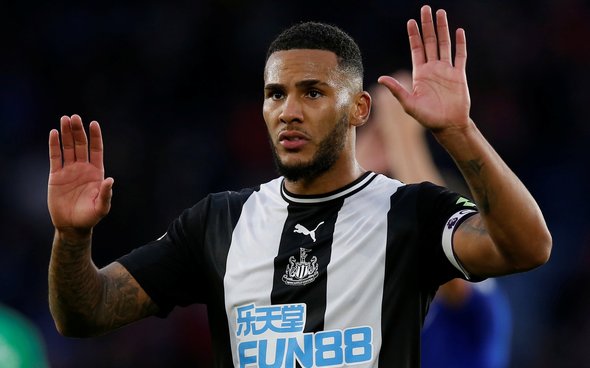 Jamaal Lascelles is likely to express concerns from his Newcastle United team-mates over Steve Bruce’s decision to change tactics for the clash against Leicester on Sunday, according to the Daily Mail.

The newspaper claims that the squad are worried by Bruce’s decision to ditch the back-three system that he had used all season in favour of a back-four against the Foxes.

Newcastle were easily beaten 5-0 by Leicester after Bruce made that tactical switch and it is understood that club captain Lascelles could speak to the Toon manager about the issue.

It is a sad state of affairs at St James’ Park at the moment. Mike Ashley is still there, Rafa Benitez has been replaced by Bruce, Salomon Rondon and Ayoze Perez have gone, new signings and usually fit players have suffered injuries and fans just don’t want to turn up to watch their team play anymore. Sunday’s defeat to Leicester just summed Newcastle up at the moment. Even a trusted player like Isaac Hayden lost his head and got himself sent off, which piled on the misery and lead to the Magpies defence conceding a glut of goals. Bruce has options to be able to keep his back-three with two wing-backs so it was a surprise to see him opt for a back-four on Sunday. Manchester United are not playing well this season but they will be out for blood when they travel to St James’ Park on Sunday. Bruce had better have that back-three system back in use.