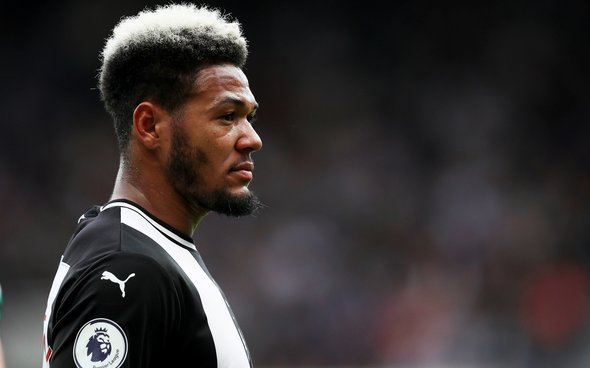 Steve Bruce should axe striker Joelinton if he wants to name his best possible starting line-up to take on Wolves at St James’ Park on Sunday.

Joelinton, 23, has been in woeful form for the Magpies.

According to stats by WhoScored, the Brazilian has averaged just 1.6 shots at goal per game in the Premier League, which is only a slightly better than defender Fabian Schar’s average of 1.2.

Joelinton really struggled at Stamford Bridge last week when Newcastle lost 1-0 to Chelsea with the forward having just one shot at goal, winning just four out of 10 aerial duels and being dispossessed twice.

It’s not as though Joelinton’s struggles are just down to that one game either as his one shot at goal against Chelsea was his first shot in three matches.

Bruce needs to make a change and it is about time that Dwight Gayle is handed his first start of the season after he returned from injury with a cameo appearance off the bench at Stamford Bridge.

Gayle scored 24 goals in 41 appearances across all competitions while on loan at West Brom last season and surely it’s worth taking a chance on the 29-year-old to make an impact in the Magpies’ lacklustre attack and seeing if he can get one over on his former club’s rivals. 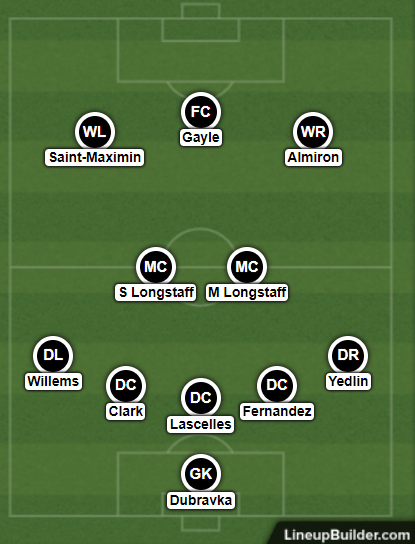 Martin Dubravka is a no-brainer to start in goals.

The Slovakia international played well at Chelsea last week despite the defeat and his new six-year contract shows that he is going to be Newcastle’s number one goalkeeper for some time.

Newcastle may be forced into a change in the back-three with the Chronicle reporting that Fabian Schar is injured.

Federico Fernandez is the obvious replacement on the right-hand side of the back-three because he is right-footed. He should join Jamaal Lascelles and Ciaran Clark with DeAndre Yedlin and Jetro Willems retaining their wing-back spots.

It is tough to decide what Bruce should do in the centre of the midfield if he wants to earn a win against Wolves because Matty Longstaff was very poor against Chelsea.

However based on the fact that he was the man of the match against Manchester United in his last outing at St James’ Park, it would make sense to keep both of the Longstaff brothers in the side while Isaac Hayden is suspended.

Wolves have very fast players in their side so it would be good for Newcastle to fight fire with fire and go for their own jet-heeled options on the wing in Miguel Almiron and Allan Saint-Maximin in support of centre-forward Gayle.