The South American double act, the two most expensive purchases in the club’s history, have combined for just one goal in a black and white shirt this season.

Gibson, it’s safe to say, has been unimpressed: “Whisper it yet again but United’s pop gun strikers Joelinton and Miggy Almiron continue their barren run in front of goal,” he wrote in his Chronicle column.

“United have scored only six PL goals through six different finishers. Only one has come from their front players with both Joelinton and Almiron still ever presents.”

It’s hard to disagree with Gibson’s sentiments, here. Joelinton and Almiron have looked about as ineffective as it’s possible to look so far this season, which is incredible given the fact they cost Newcastle a combined £60million near enough. For all the money, the team have received just one goal scored. Obviously we know that it takes players a bit of time to adapt to the Premier League – it always does – but this is getting ridiculous now. Almiron, in particular, has made next to no progress since his arrival back in January, and never even looks like scoring. The statistics from this campaign make for damning reading for both men. As per WhoScored.com, Almiron is averaging just 0.5 key passes per game, with Joelinton’s tally standing at one. Both men attempt less than one dribble an outing, while they both average more than one unsuccessful touch a game. Then there’s how often they get dispossessed, which is startling. Almiron’s average is 3.1 times per outing, Joelinton’s: 4.5. That’s just disgraceful. It’s no wonder their average WhoScored ratings stand at 6.31 (Almiron) and 6.57 (Joelinton). 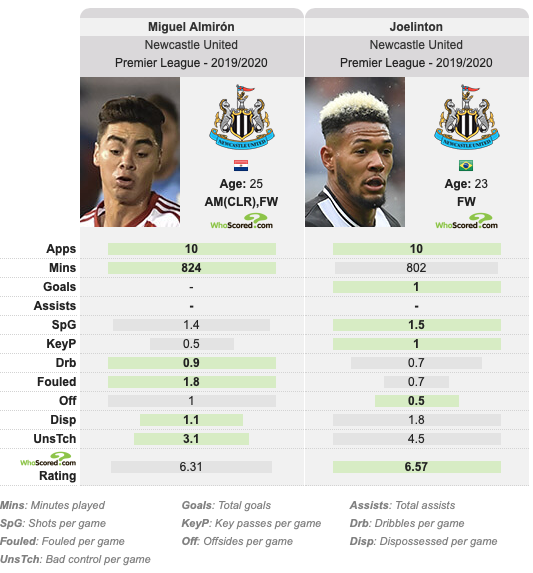