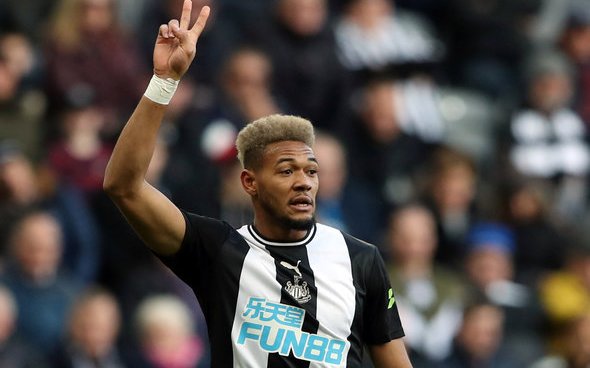 Peter Crouch has admitted that he feels sorry for Newcastle United striker Joelinton.

The Brazilian’s difficult start to life in England continued on Sunday afternoon when he drew another blank in the 1-1 draw against Wolves, making it just one goal in 10 Premier League appearances so far.

But Crouch has claimed that he has sympathy for the 23-year-old.

“The stats make for bad reading. What’s he supposed to do?

“You need runners, you need support. He didn’t get that.

“You can see his frustration building.”

It would be easy to bash Joelinton for his lack of goals at the moment, but to do so would massively oversimplify the issue facing Newcastle at the moment. Against Wolves on Sunday, the Brazilian won 11 duels, and yet only managed one shot on goal, as per Whoscored. That really sums up where he and United are at currently. He’s working hard, he’s doing his job, but he can’t do everything alone, and far, far too often he is being left isolated at the top end of the pitch. That means that even when he does win a duel or get the ball down to his feet, he has a mountain to climb and nobody to help him. Sure, he hasn’t been perfect, but the 23-year-old can’t be expected to do everything alone.