Tony Cascarino has named Newcastle United captain Jamaal Lascelles in his Premier League team of the week, as named in The Times.

The 25-year-old skipper opened the scoring for the Magpies in their 1-1 draw against Wolves at St. James’ Park with a towering headed effort, before his side were pegged back by a second half strike from Jonny Otto.

Sean Longstaff then same red late on for a late challenge on Ruben Neves, but the Toon Army hung on for the point, and Cascarino was eager to acknowledge Lascelles’ efforts in that result. 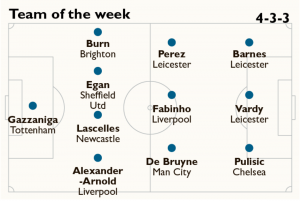 Lascelles was immense on Sunday. The Newcastle captain not only scored a vital goal when his forwards were struggling, but he put in a wonderfully assured defensive display too. With three clearances, one interception, and a Whoscored rating of 7.35, he was superb, and fully deserves his place in Cascarino’s lineup. Newcastle are probably going to be in for a tough time this season, if we’re being perfectly honest, and if they are to avoid the drop they will need their key figures to be at the top of their game. That includes Lascelles, who has an extra duty as caption and leader to rally his men. The best way he can do that is to lead from the front, and if he keeps up this level of performance, he will do exactly that.