Bruce surely piling too much pressure on Saint-Maximin

We all know that this Newcastle United side are crying out for a creative spark; something, anything to light a fire under the belly of the Magpies’ attack.

This season has been one long, hard slog for head coach Steve Bruce and his players. They’ve won only one game and have scored just four goals this term, the joint fewest tally in the division.

It’s no surprise, then, to see the Toon boss calling for summer signing Allan Saint-Maximin to provide a little of what the Magpies are missing at this moment in time.

“He gives us something that we’ve not got,” he said, as per The Chronicle. “He’s got that bit of pace, bit of power and we’ve seen that so he’ll definitely give us something which will add to us going forward.”

While Bruce’s eagerness for something different is understandable, he is surely piling all the pressure on a man with only 57 minutes of Premier League football to his name.

The statistics from Saint-Maximin’s last season with former club Nice show that he can provide the cutting edge Newcastle need, although his performances in limited action for the Magpies suggests that he may already be starting to fall victim to the creative malaise on Tyneside.

As per WhoScored.com, the 22-year-old averaged 2.2 shots and 1.7 key passes per game for the Ligue 1 side, while embarking on 4.2 dribbles an outing and being fouled twice a game on average.

At Newcastle, though, the winger is only averaging 0.7 shots and 0.3 key passes per game. His dribbles tally is down to 1.7, while he is only being fouled an average of 0.7 times an outing.

It must be said that those numbers have come in just one injury-hampered start and two substitute appearances. So it’s not really a fair comparison at this stage, but it’s all we have.

However, with those numbers available to us, we have to wonder whether Saint-Maximin can rise to the occasion with Bruce pouring on the pressure? The answer to that question remains very much to be seen at this stage. 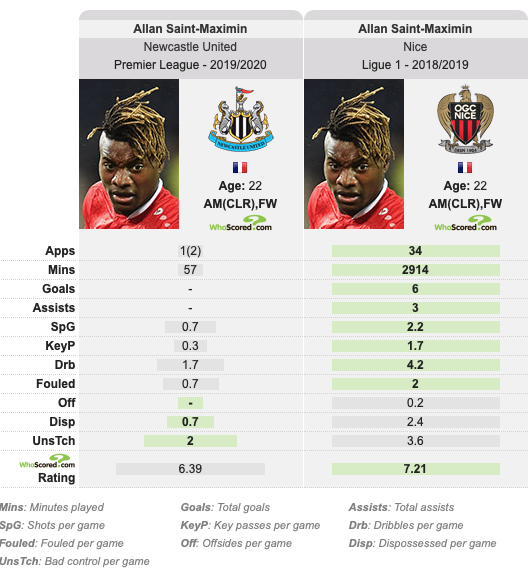