Bruce starting to worry about Almiron 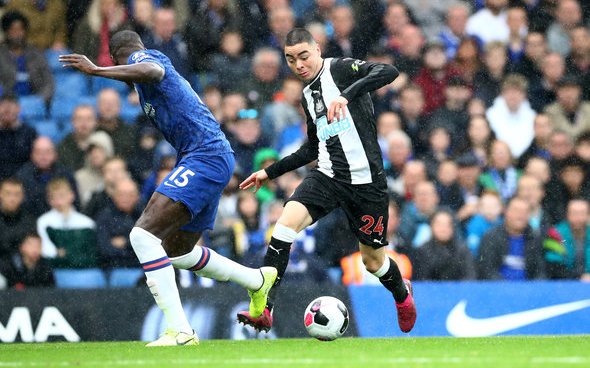 Newcastle United head coach Steve Bruce has admitted he is baffled by the struggles of Magpies playmaker Miguel Almiron.

The Paraguay international, on a reported £42,327-per-week [Source: Spotrac], has yet to open his account for the club since moving to Tyneside in January, and Bruce is starting to worry about him.

“Almiron is a very decent player, but he looks a little bit short on confidence at the moment because he hasn’t scored a goal,” he said, as per the Northern Echo.

“We hope that can return, but it only really returns when he gets one.”

Bruce has really kept faith in Almiron, starting him once again against Chelsea on Saturday, but you get the sense that he might just be becoming frustrated with the South American. He was substituted off first in the defeat at Stamford Bridge, and it seems like only a matter of time until Bruce axes him from the starting line up. As he says, the 26-year-old is simply very short on confidence at the moment, which we saw once again up against Frank Lampard’s side. As per WhoScored.com, the Paraguayan had three unsuccessful touches of the ball, while the one shot he had was off target. Meanwhile his pass success rate of 79.2% left a little bit to be desired. You do hope that just getting a goal will turn things around for him, but for now his performances simply don’t justify his continued presence in the starting line up.