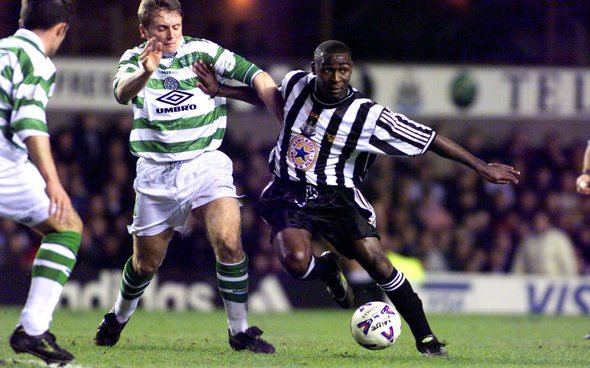 Former Newcastle United striker Andy Cole has revealed what then-Magpies boss Kevin Keegan did that convinced him to leave the club in 1995.

The ex England international emerged as arguably the premier centre forward in English football while plying his trade at St James’ Park, but he eventually ditched them for their title rivals.

Now, he’s revealed why: “Naturally the Geordie fans were disappointed that I had been sold,” he told The Sun. “The move was totally out of the blue, even for me. I had not long signed a new contract at Newcastle for four more years. I wasn’t under the impression I’d be moving in the next six months.

“So when it happened, I didn’t understand it. It was so quick. I played for Newcastle on the Sunday against Blackburn in the FA Cup. By Monday evening, I was going down to Manchester. Kevin told me in no uncertain terms, using industrial language, what to do [during bust-up before a game against Wimbledon in 1993].

“So I said, ‘I’m not going to have people talk to me like that’ and I left the team hotel. I went walkabout. I missed the game and Newcastle lost 2-1. I never believed the relationship was the same with Kevin towards me after that. But the move was never engineered by myself – the deal was made due to Kevin.”

Cole kind of contradicts himself a little bit, here. He says that he was unaware that he would be leaving Newcastle, while he’d obviously decided to sign a new long-term contract with the club not long before his move to United. However, he’s also claiming that his departure was down to Keegan, and that the manager was never the same with him after a bust-up they had before a game in 1993. So for over a year, presumably, Keegan and Cole had been enduring a difficult relationship. Despite that, Cole believes his exit from the club was completely unexpected. That smacks of a bit of naivety, doesn’t it? Perhaps he’s only realised in hindsight that his relationship with Keegan had never recovered, but this has a whiff of placation about it, to be honest. Plus, his behaviour in that Wimbledon game was bang out of order. He abandoned his team and let his teammates down just because the manager had been a bit forceful with him. Come on now, that’s just not good enough.