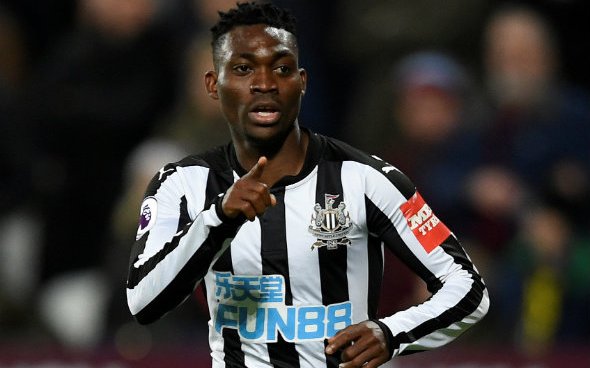 Stephen Warnock highlighted that Newcastle United attacker Christian Atsu had an important role to play in the upcoming clash against Leicester City and it shows what a key player the 27-year-old has become for the Magpies.

The pundit was asked what the Magpies needed to do in order to beat the Foxes when they face them at the King Power Stadium on Sunday and Warnock named-dropped Miguel Almiron, Joelinton and Atsu.

Warnock explained that Newcastle need to play similar to how they did in the 1-0 win over Tottenham to get a positive result from their Leicester trip, and stated how wingers Almiron and Atsu were a big part in that victory and that the duo needed to drive their team forward and make something happen.

“They’re going to have to play a similar way that they played away at Tottenham and this comes down to your wingers, it’s Almiron, it’s Atsu and Joelinton is going to have to be strong up front, can you hold the ball up?” said Warnock on Football Centre (11:35am, Thursday, September 26th, Sky Sports News).

“You win the ball, can you carry the ball up the pitch for your players? (clips v Tottenham play) Almiron is unfortunate here but he shows the pace that he has, and this one here is perfect as soon as he picks the ball up, you know you’re in a situation where you can attack due to all this space.

“All Spurs’ players are behind the ball and you expect Leicester to be the same, so can you drive forward and have these players make something happen?

“Almiron does that, can he pick the right pass? No but it’s an opportunity and you just gotta hope your forward players create something.

“This is brilliant from Atsu (more clips play) this is what you want, you want players running at the defence, takes the pressure off, if you’re under pressure for as long as they were, players look to spin back, but not him.

“He’s thinking how high can I take my team forward, Joelinton takes off soon as Atsu gets the ball, and they did this superbly all game, and Atsu here turns back then goes again as he knows he has to take the pressure off his team.”

While Almiron and Joelinton being singled out as two important players for Newcastle is no surprise as both were big-money signings, Atsu being named then gushed about, shows how he should now be recognised as a key player.

The 27-year-old Ghanian was in-and-out of Newcastle’s side last season under Rafa Benitez as while he did rack up 28 league appearances, only eight of his outings saw him complete 90 minutes.

Atsu managed to rack up just the one goal and no assists in his outings, but under Steve Bruce it seems his importance to the team has increased and he has a no leash of life as a result.

The winger has featured in the Magpies’ last four league games, after missing their losses to Arsenal and Norwich City, and has already racked up two assists.

This is no surprise as Atsu has been a creative force so far as he has averaged 2.3 key passes per game and has tried to make things happen shown by the fact he has completed 2.5 dribbles per game. (Source: WhoScored)

When you consider the Magpies haven’t been a force going forward, they’ve managed to score only four league goals this season, it’s easy to see that a player as attack-minded as Atsu has become key to the side just like Warnock suggests.