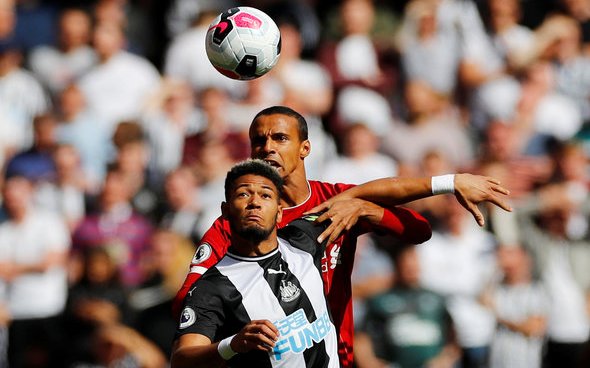 Micky Quinn claimed Newcastle United had paid over the top for attacker Joelinton despite admitting he has looked alright in his first few appearances for the club.

The former Magpies forward was asked for his opinion on Joelinton and shared that with Miguel Almiron, Matt Ritchie and Christian Atsu supporting him then he has a chance of succeeding at St James Park.

Quinn then remarked on the chances of the Magpies being relegated by sharing that he was confident Steve Bruce’s side would avoid the drop but didn’t think the club had ambitions to do anything but survive in the Premier League.

“I think they’ve actually paid over the top for him but he looks alright, strong, I think he needs a couple of more goals,” said Quinn on talkSPORT (8:13am, Wednesday, September 18th).

“But I think with the way they do play, where they play on the counter break and with Almiron, Ritchie, Atsu supporting Joelinton upfront then he has a chance.

“I think they will stay up, I do, they’ll stay up but I don’t think there isn’t too much ambition after that.”

Quinn’s verdict on Newcastle is a mixed bag. While the ex-Magpies star hasn’t been bowled over by Joelinton to the point where he thinks he is worth the £40million the club spent on purchasing him, as per the BBC, he doesn’t rule out the possibility that the Brazilian can succeed at the club. The 23-year-old has racked up one goal in his first five league outings of the season, he notably scored the winner against Tottenham and has shown glimpses of his talent. Joelinton has averaged two shots per game and averaged 1.2 key passes per game in order to be a useful attacking outlet (Source: WhoScored). The 23-year-old has at times not been helped by his teammates as they haven’t carved out enough chances for him, for example, he only touched the ball 35 times in the 3-1 loss to Norwich City (Source: WhoScored), and it’s important that the likes of Almiron and Atsu continue trying to find a way to feed the ball to Joelinton in the club’s upcoming games. Also, it’s nice to hear Quinn is confident about the Magpies avoiding the drop as Bruce’s team currently find themselves in the bottom three after the first five games of the season.