Morrison has doubts about Carroll/Joelinton partnership 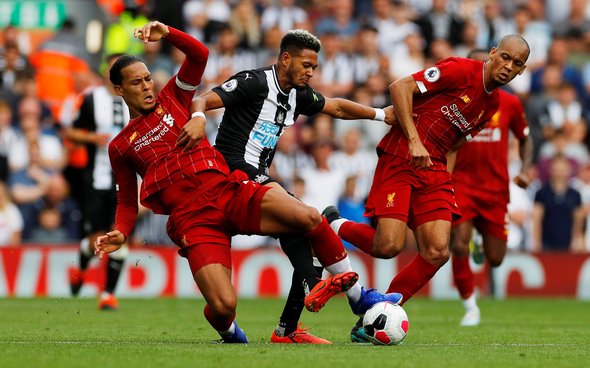 Clinton Morrison seemed to worry about whether Newcastle United attackers Joelinton and Andy Carroll could form a lethal partnership and is clearly wrong to do so.

The Sky Sports pundit was asked for his thoughts on Steve Bruce’s attacking options and clearly dismissed the idea that Carroll and Joelinton could work well together leading the line.

Morrison claimed the players were similar to each other and backed Dwight Gayle to be a better fit to play upfront if Bruce wanted two forwards on the pitch.

“You’re right, Joelinton has only got one this season and he does all of his work outside of the box,” said Morrison on Sky Sports News (12:36pm, Saturday, September 21st).

“Obviously they’re talking about Andy Carroll getting fit but he’s similar, I think, maybe as he hasn’t got a lot of strikers, Dwight Gayle when he gets fit could work.

“There have been questions marks over whether he can play in the Premier League, but he’s the one who can play with one or the other.

“But they’re gonna have to start delivering soon as there aren’t enough goals in that Newcastle team from centre-forward or the midfielders.”

Bruce needs to find a way to get Newcastle firing, they’ve managed only four goals in their first five league games, and who knows Carroll and Joelinton may be the answer.

After all, how can Morrison confidently write the duo off without having seen them play together as two similar forwards can work together as they will likely understand how the other works.

Also, Morrison said that Joelinton works fantastically outside of the box, so why can’t he and Carroll work together well as the former England international isn’t exactly renowned for what he does outside of the box.

24 of Carroll’s 53 Premier League goals have come from headers and it’s fair to say that if your main asset is scoring with your head then you won’t often be found lurking outside the box. (Source: Premier League)

Also Carroll and Joelinton forming a lethal partnership would clearly only be a bonus for Bruce as the Newcastle manager was previously reported by the Daily Star as only viewing the 30-year-old as a player capable of being an impact substitute, and that means the two summers signings linking up isn’t exactly going to be the Magpies boss’ plan A.

So Morrison is clearly wrong to worry about the idea of Joelinton and Carroll working together just yet, as it will only be an issue if the Magpies still struggle for goals in the coming months and the duo end up being Bruce’s first-choice pairing.