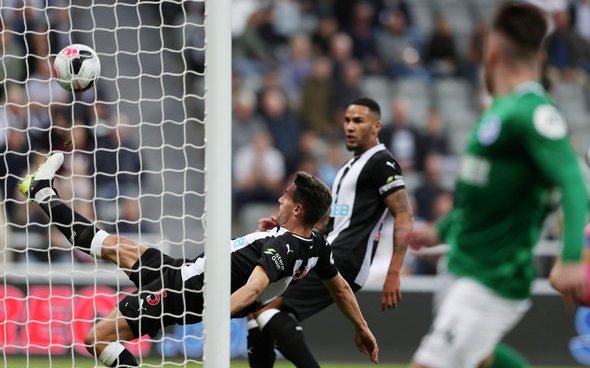 Newcastle United have been in disappointing form this season and the issue behind their struggles is clearly their inability to be a good attacking force.

The Magpies sit 17th in the Premier League after racking up just five points from their first six games.

In their first six outings, Newcastle have only scored four goals while conceding eight.

When you consider that nine Premier League teams have conceded more goals, then clearly the Magpies don’t have to worry about being more defensively sound at this moment.

Steve Bruce should be bringing out the chalkboard trying to think of ways to make his side more attacking.

However, apparently all his focus isn’t on trying to make the Magpies more likely to score ahead of the clash with Leicester City.

The Daily Star reported on Wednesday that if Bruce opts to axe attacker Miguel Almiron due to his poor start to the season, the Magpies boss may move 27-year-old defender Fabian Schar into midfield and fill the hole left in the backline with Federico Fernandez.

The newspaper claim that Bruce may view switching Schar’s position from centre-back to defensive midfielder in order to stiffen up his midfield for the clash with Leicester, but surely that decision doesn’t address the issue of how poor the Magpies are going forward.

After all, removing an attacker and giving their spot in the starting line-up to a defender hardly screams goals inbound.

While it’s true that the Magpies will have to be at their defensive best against Leicester City as the Foxes sit third after racking up 11 points from their first six games, Newcastle shouldn’t just be going to the King Power in order to sit back.

Almiron may not have registered a goal or an assist this season but the fact he tries to push the Magpies’ agenda going forward by averaging 1.3 shots per game this season (Source: WhoScored), means he is better than adding another defender to the line-up.