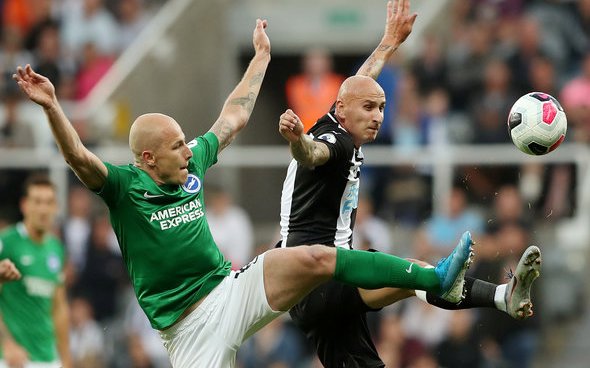 Darren Bent claimed that midfielder Jonjo Shelvey was still Newcastle United’s best player and suggested his poor form was a result of being low on confidence.

The Sky Sports pundit openly admitted that the 0-0 draw with Brighton wasn’t the 27-year-old’s finest hour but backed him to turn things around.

“For me he looks low on confidence, I still think he’s their best player, the one with all the quality,” Bent told Football Insider.

“I’ve played with players like him, who are on a different level to everyone else technically, they’re walking around playing and he’s just thinking: ‘What am I doing playing with these players, they’re not doing me any favours.’ I know he can’t think that because he’s their best player and they need him.

“It wasn’t his best game but I think he’s still got the quality to turn things around.”

There’s no denying that Shelvey is a talented player on his day as you don’t rack up 191 Premier League appearances by not having something special about you.

Nor is there any denying that the midfielder is more than capable of turning his form around.

Shelvey has averaged 1.3 bad touches of the ball per game, where he has lost possession, across the four league appearances he has made this season and has only achieved a pass completion rate of 78.2%. (Source: WhoScored)

The midfielder has also failed to register an assist despite making 1.8 key passes per match, and he is clearly better than his stats suggests, it’s just all about delivering what he is capable of.

However while Bent is right to back Shelvey to improve, he is living in the past by calling the midfielder Newcastle’s best player.

That tag has to be earned and giving that it’s been a while since Shelvey has regularly delivered the goods, he simply can’t be classed as the best member of Steve Bruce’s squad anymore.

The midfielder lost his starting place at St James Park under Rafa Benitez last season, he made only 16 league appearances, and if the Spanish manager had stayed, then he probably would have continued not to feature as much.

Shelvey was arguably one of the Magpies best player in his 2017/18 season when he not only was involved in four goals during his 25 league outings but also captained the side at times.

The 27-year-old also wowed in his 2016/17 season for the Magpies when the club dropped into the Championship as not only was he involved in getting 13 goals but he averaged a rating of 7.19 on WhoScored.

So with that in mind, you do feel like Bent is living in the past by claiming Shelvey is Newcastle’s best player especially with the likes of Fabian Schar and Martin Dubravka at St James Park.