Following the 5-0 defeat at the hands of Leicester City former Newcastle United forward Micky Quinn posted a message that he wanted pinned up in the dressing room for the Magpies’ next game at St James Park.

The retired Magpies attacker posted some old quotes by himself about how important it is to give the Toon Army something to cheer about when next playing at St James Park.

“St James Park is the only pitch I ever walked out on to where the hairs on the back of my neck literally stood up,” stated Quinn, via his personal Twitter account.

“Every single one of those goals I scored was for the fans.

“It sounds silly, but I just wanted to score for those supporters because they had been through bad times for so long after being relegated and I wanted to give them something to cheer about.” 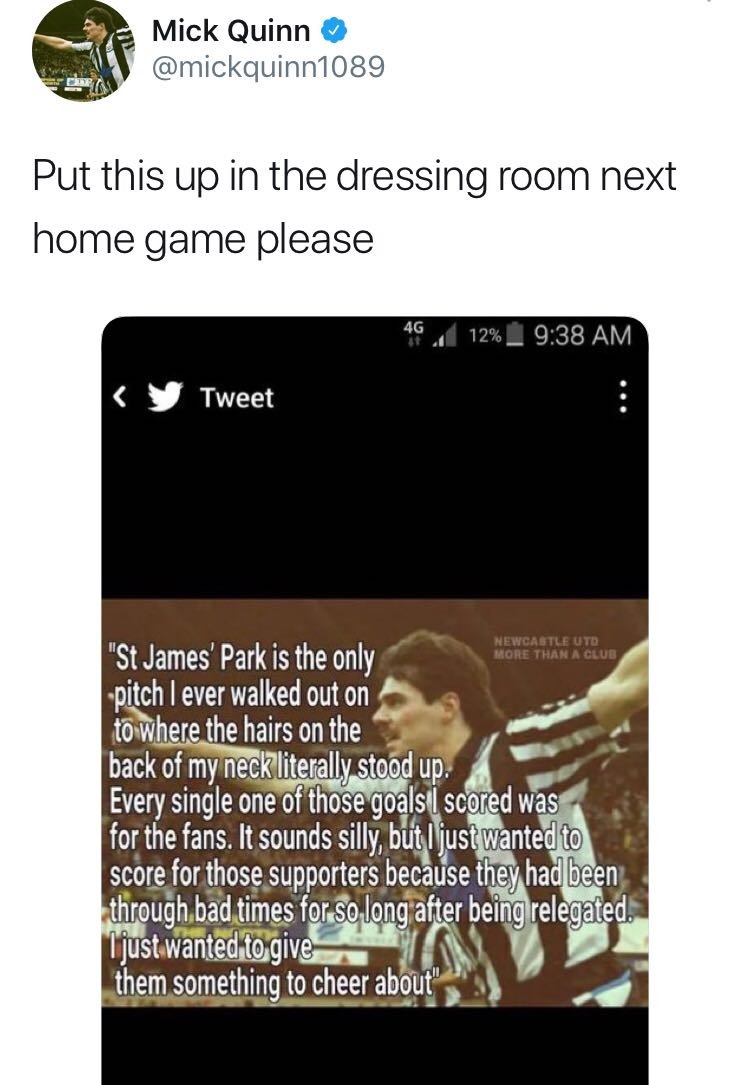 Quinn’s advice about how the Magpies can do better when playing at St James Park in the near future is surely a telling hint about how he views the current squad.

The former Magpies attacker trying to hype up the Magpies players and insisting that putting his motivational words in their dressing room could make difference, surely implies he thinks the squad is good enough just not motivated enough.

Newcastle were brushed aside by Leicester on Sunday and didn’t really show many positives signs for fans to cling to.

The Foxes had 69% possession, registered five shots on target compared to the Magpies’ zero and had 10 more shots in general than Steve Bruce’s side. (Source: WhoScored)

Despite these stats suggesting Newcastle were outclassed on Sunday, it’s easy to see why Quinn hints that the Magpies have a good enough squad and that it must be down to attitude.

After all, the likes of Jamaal Lascelles, Paul Dummett, Martin Dubravka,  Fabian Schar and Isaac Hayden were all good enough last season to help Rafa Benitez guide his side to a comfortable finish in the Premier League.

While Steve Bruce’s tactics may arguably not be getting the best out of these players, their performance was riddled with player mistakes that shouldn’t be made regardless of the tactics.

Given that Newcastle currently sit 19th in the Premier League, hopefully, Quinn is right to imply that motivation is the problem as you’d like to think that the players could easily address that problem in order to fly up the league, compared to simply not being good enough.