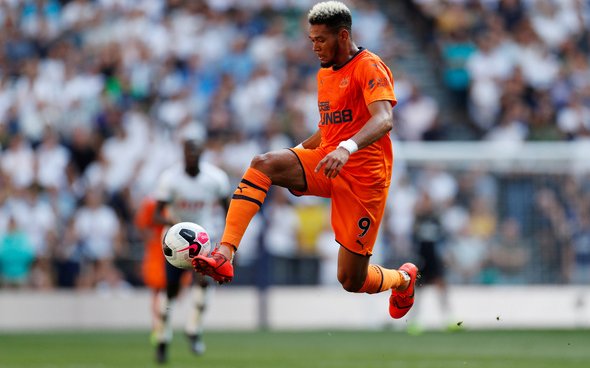 Joelinton may have only scored one goal in his first four appearances for Newcastle United but the 23-year-old is starting to prove Rafa Benitez wrong with his performances in the Premier League.

Mike Ashley sanctioned a club-record £40million spend on Joelinton in the summer transfer window when the Brazilian was snapped up from Hoffenheim, even though, as reported by the Daily Mail, former manager Benitez had reservations about the striker.

It was understood that Benitez thought that Joelinton was only worth £20million even though Steve Nickson insisted that the ex-Hoffenheim forward would thrive in the Premier League.

And while he is yet to truly live up to Nickson’s billing, Joelinton is still doing a lot to prove that Benitez was wrong about him.

Salomon Rondon was a colossus up front for the Magpies last season when he was on loan from West Brom and Benitez reportedly wanted to sign him on a permanent basis rather than Joelinton.

However Rondon turns 30-years-old later this month while Joelinton has only just celebrated his 23rd birthday.

It took six Premier League appearances for Newcastle for Rondon to get his first goal while Joelinton hit the back of the net in his third as the Tyneside club won 1-0 away against Tottenham last month.

Joelinton has also started to attract plaudits from pundits and those who support the club, with former England cricketer Steve Harmison recently gushing over the South American striker.

When asked by host Laura Woods if he likes Joelinton, Harmison, as shown via talkSPORT’s official Twitter account on Thursday, said: “I like him. His work-rate has been excellent.”

Graeme Souness has also been impressed with what he has seen from Newcastle’s most expensive player.

Speaking on Sky Sports Premier League on Sunday 25 August, the ex-Magpies manager hailed Joelinton’s “superb” first touch and strike of the ball that led to him opening his goalscoring account with the North-East club.

It’s been more that just work-rate that has been behind Joelinton’s strong early form for Newcastle.

According to stats by WhoScored, the striker has completed 87 per cent of his passes and out of strikers in the Premier League who have so far started all four matches, no one ranks higher than the Magpies man.

He has also, on average, won 3.3 aerial duels per league appearances, fired 2.3 shots at goal and supplied one key pass.

Joelinton is already looking as though he can do better this season than Rondon did last term under Benitez.

The ex-Hoffenheim ace will only improve as he continues to get to grips with his new team-mates and life in the Premier League and once he finally clicks, Benitez might have to look back and realise that he was wrong about the former Brazil Under-17 international.