Schar makes Crooks’ Team of the Week after Brighton display 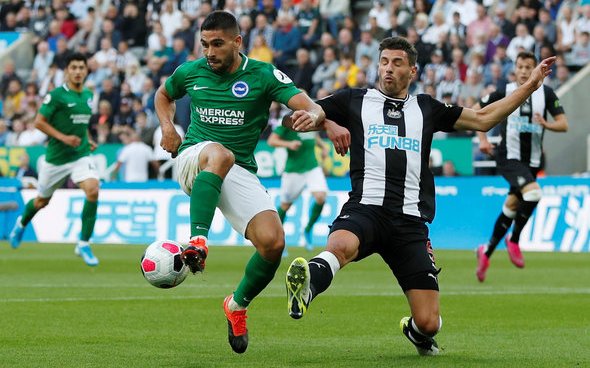 The Switzerland international produced another tremendous performance at the heart of the Magpies’ defence, making a phenomenal goal-line clearance to maintain the goalless draw. Crooks was very impressed.

“The chip by Aaron Connolly was a certain goal and it needed something very special from a defender to clear the danger,” he wrote on the BBC Sport website. “That moment of magic came from Fabian Schar whose clearance off the line was nothing short of amazing.

“The clearance off the line by Schar could, come the end of the season, be Newcastle and Steve Bruce’s lifeline.”

Whether a point against Brighton at home will prove to be Newcastle’s lifeline come the end of the campaign remains to be seen, but there’s no doubt that Schar’s clearance prevented what was already a pretty bad day for the Magpies from turning into a terrible one. It was a terrific chip from Connolly, with the young man beating Martin Dubravka all ends up in the home side’s goal. Luckily for Bruce, though, Schar was on hand to somehow claw it away off the line. That sort of moment is why Schar has solidified himself as Newcastle’s number one centre back. Jamaal Lascelles is powerful, Paul Dummett reliable and Florian Lejeune, when he’s fit, is a classy operator. But Schar is the main man at the back for Bruce’s team. The former Deportivo star holds everything together in defence for the Magpies, while also contributing hugely from an offensive point of view. There’s no doubt that he deserves his place in Crooks’ Team of the Week.