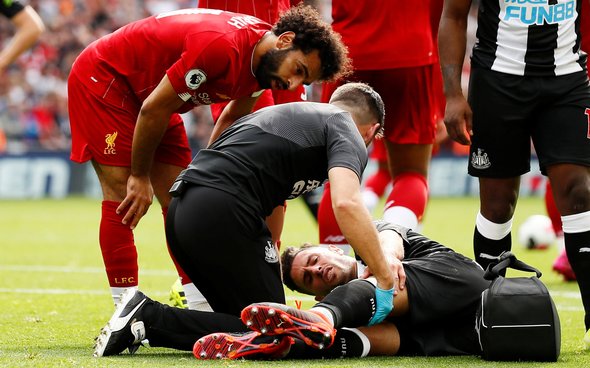 Newcastle United defender Fabian Schar is set to give Steve Bruce a major boost ahead of the crucial clash with Brighton at St James’ Park on Saturday.

The Switzerland international was forced off the pitch through injury at Anfield in the 3-1 defeat at Liverpool last time out, and Bruce admitted after the game to the Chronicle that club doctors were uncertain on whether it was serious cramp or a calf tear.

Schar left Liverpool unaided, and now looks set to keep his place in the heart of the Magpies’ defence after an update on his fitness.

Bruce confirmed in his pre-match press conference on Friday, as quoted by journalist Chris Waugh on his personal Twitter account, that the 27-year-old is fully fit.

Schar has been one of Newcastle’s best performers both going forward and in defence over the past year, and after both Ayoze Perez and Salomon Rondon left the club in the summer, he was the top-scorer with four goals.

The £40,000-a-week enforcer [Spotrac] would have left fans extremely worried when he was on the ground at Anfield, and even more when he was forced to leave the pitch early with the injury.

Early uncertainty surrounding the problem could have led to confusion on whether or not Schar would be fit for the important game against Brighton, who currently sit in the bottom five of the Premier League with Newcastle.

Schar has been the standout defender for Newcastle this season, averaging 2.6 tackles and 2.8 interceptions according to WhoScored, the most in the entire Magpies backline.

Continuity is a vital part of success in any profession, and Schar’s fitness means that Newcastle can continue with the partnership between the Swiss enforcer, Jamaal Lascelles, and Paul Dummett.

Newcastle fans will be breathing a sigh of relief that their main defender has been confirmed as fit, and will be delighted to see him keep his spot against Brighton.