Saint-Maximin weighs in on Owen and Shearer spat

Newcastle United winger Allan Saint-Maximin has taken to Twitter to comment on the spat between Michael Owen and Toon legend.

The English duo came to blows on Twitter when Shearer accused Owen of failing to put in his full effort at St. James’ Park and Owen accused Shearer of trying to leave his boyhood club for Liverpool.

But Saint-Maximin took it upon himself to act as peacemaker in the argument, tweeting a gif of John Lennon with the caption: “Make love, not war, that’s all we’re saying”. 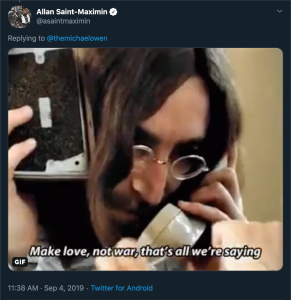 Saint-Maximin is ace, isn’t he? He may have struggled to get any substantial game time for the Magpies during his short spell in the north east, and he may have hamstrings that seem more like cheese-strings, but if he keeps up his charm offensive on social media, that might be worth his transfer fee alone. The Frenchman is clearly a big character, from his flamboyant hair to his penchant for Gucci headbands, but he also seems like a humble, affable guy with his screwed on right as well. He clearly has talent in abundance too, and if he can get himself fit and firing, then he can become a real hero on Tyneside. Last year for Nice, he averaged an impressive 4.2 successful dribbles per game, as well as 1.7 key passes, as per Whoscored. If he can come anywhere near that kind of standard for the Toon Army, and if he keeps on showing himself to be such a standup guy, then he will be a firm favourite amongst fans.