Saint-Maximin should be worried by Bruce comments

It would be fair to say that Allan Saint-Maximin has not had the most ideal of starts to his career at Newcastle United.

A record of two injuries in his two appearances is hardly inspiring and the Toon Army might well be wondering if they have brought in a sick note of a player over the summer.

It will no doubt be frustrating for the young Frenchman, who would have wanted to hit the ground running at St James’ Park, as he faces a number of weeks on the sidelines, missing out on a trip to Anfield – one of the highlights of every Premier League side’s season.

As a notable new arrival on Tyneside, the former OGC Nice forward might have expected to go straight into the starting XI and stay there – after all, a club like Newcastle do not splash out the cash to have a player sitting on the bench.

Unfortunately for Saint-Maximin, Steve Bruce’s comments on one of his teammates will not fill him with confidence over making a return to the side when he does get fully fit.

Speaking to the Shields Gazette, Bruce was left applauding the form of Christian Atsu, the Ghanaian winger having made a comeback of his own after injury.

He said: “I only saw Christian from the back end of last week due to his injury and AFCON. I have been very pleased with him. He ran himself to a standstill (v Watford).”

If Bruce’s comments were not enough to worry Saint-Maximin about his place in Newcastle’s side, then maybe some cold, hard numbers will, with Atsu outperforming his teammate in nearly every single area.

Yes, the Frenchman might only have 40 minutes of action under his belt to date but he has done absolutely nothing of note during his time on the pitch – finding himself dispossessed more than Atsu despite the Ghanaian having been on the pitch 115 minutes longer. 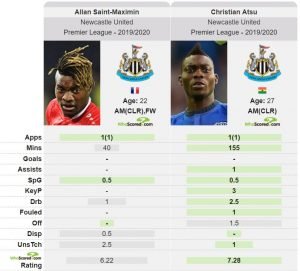 The most worrying thing for Saint-Maximin will be how impressive his teammate’s stats are, with an impressive contribution in attack over the past two games – including a delightful assist for Joelinton’s goal against Tottenham.

His passing stats also stand out – averaging 27 passes, 1.5 successful crosses and 3 key passes – demonstrating the difference he has managed to make in the side since returning. 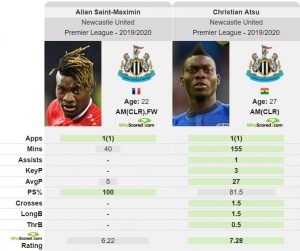 Saint-Maximin will be ruing his luck at being forced to watch from the sidelines but when you are given a chance, you have got to take it. Atsu has done just that.