When you break things down at Newcastle United at the moment, every day is a step in the right direction from a footballing standpoint.

Not only will every day training likely bring the players further into head coach Steve Bruce’s philosophy, but it will also bring the side closer and closer to having star man Matt Ritchie fit again and back in the starting line up.

The quality that the Magpies are missing out on at the moment was laid bare on Monday when The Chronicle listed the Scotland international as one of the club’s best signings of the past decade.

Ritchie is a terrific player, a real standout at St James’ Park with genuine Premier League ability, and so it would be no surprise if the Toon Army were licking their lips ahead of his return.

Sky Sports News reported last month that the 30-year-old would be out of action for at least two months after going down in a Carabao Cup clash with Leicester City, meaning that he should be back around the end of October.

Until then, though, the Newcastle fans will be praying for a safe and speedy recovery for the former Bournemouth man. When you consider the fine form he started the season in, that’s nothing shocking.

Comparing his statistics from this term against his replacement at left wing back, Jetro Willems, you see just what Bruce is missing with Ritchie out of the team.

As per WhoScored.com, he has beaten out the Dutchman in all but two major defensive statistical categories this campaign. Yes, it’s a small sample size this term, but Ritchie has still been dominant.

With that said, let’s look forward to his return, because it can’t come soon enough. 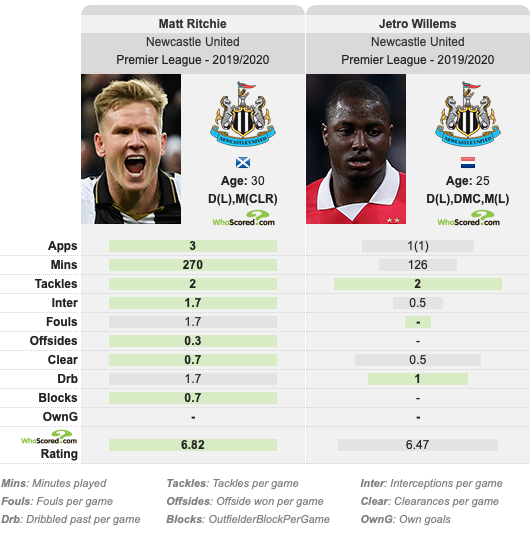