The Magpies had representatives in attendance at the Portuguese side’s 2-1 defeat to their German visitors in Lisbon.

Alves shared a list of clubs who had sent scouts to his personal Twitter account, with the Toon Army joining the likes of Bayern Munich, Borussia Dortmund, Barcelona, Juventus, and Liverpool at the Estádio da Luz. 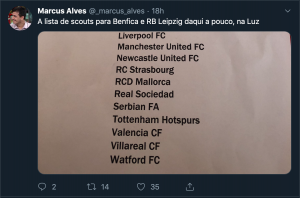 While Alves doesn’t specifically name a player who Newcastle may have been spying on, the fact that they have representatives at this calibre of game can only be a good thing for the club. It shows an awareness of the quality that they must be bringing in to compete at the highest level. Scouting alongside some of the most fearsome names on the continent is unlikely to elevate the Toon Army to the  level of those clubs any time soon, but it does show that the Magpies are looking in the right places, as well as heightening the chances of them picking up any talents who may slip through the cracks for those top tier teams. Hopefully this kind of mission hints at a slight change in tact from those in charge of recruitment, and in turn, the hope will be that United can start spending more regularly on high calibre playing staff.