Newcastle missed out on Kone

Newcastle United endured change from top to bottom this summer, as Steve Bruce took charge of the club.

Bruce’s first task as manager of the Magpies was to oversee a squad that was desperate for reinforcements after players such as Ayoze Perez and Salomon Rondon left the club.

After strengthening in the final-third, Newcastle looked to add wing-backs to their side as Bruce looked to continue with Rafael Benitez’ five-at-the-back formation.

The Magpies managed to confirm the signings of Emil Krafth and Jetro Willems in defence, but it appears that the club missed out on another wing-back in the summer.

New Lyon left-back, Youssouf Kone has claimed, as quoted by Daily Star journalist Aaron Stokes on his personal Twitter account that he chose the French club for footballing reasons, and if he did it for money he would be at Newcastle.

“I followed Ligue 1 from Mali and Lyon was a team that always played well,” he said.

“If I was looking at the financial side, I would have gone to Newcastle, but I chose the sporting project.” 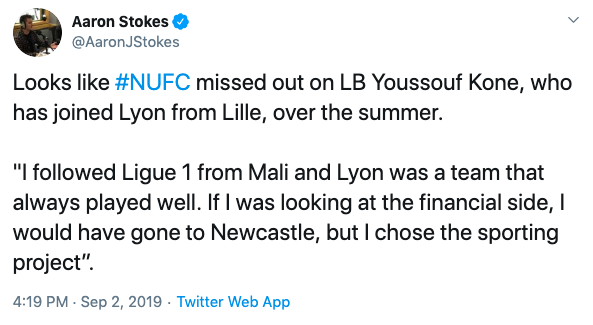 Sky Sports have confirmed that Matt Ritchie will be out of action for two months with an injury suffered in the Carabao Cup defeat to Leicester City, meaning Willems deputised in the Scotsman’s absence against Watford.

Missing out on Kone could come back to haunt Newcastle, with the Malian international surely set to star in Ligue 1 with Lyon.

When comparing Kone to Ritchie and Willems from last season via WhoScored, it is clear to see how much of an upgrade the 24-year-old could have been. 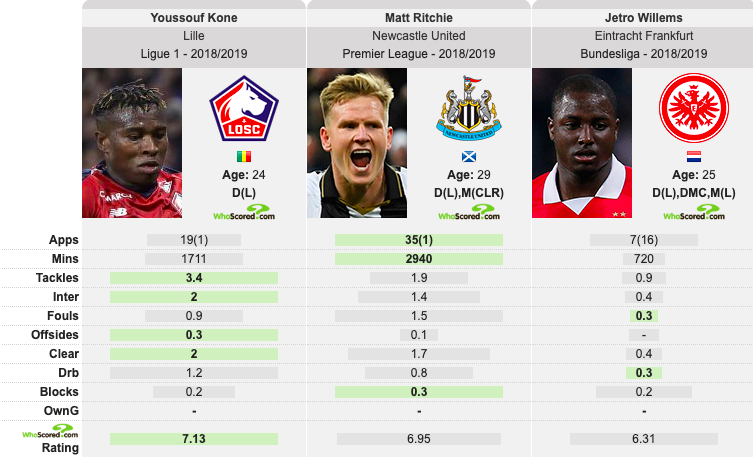 The Malian received a much higher WhoScored match average rating in the previous campaign when making 20 appearances – the fewest between the three.

Kone averaged significantly more tackles per game, and also averaged more interceptions and clearances for Lille, compared to the Newcastle duo who weren’t as solid at the back.

With the injury to Ritchie and a lack of consistent football for Willems recently, missing out on Kone could certainly come back to haunt Newcastle in the next couple of months.