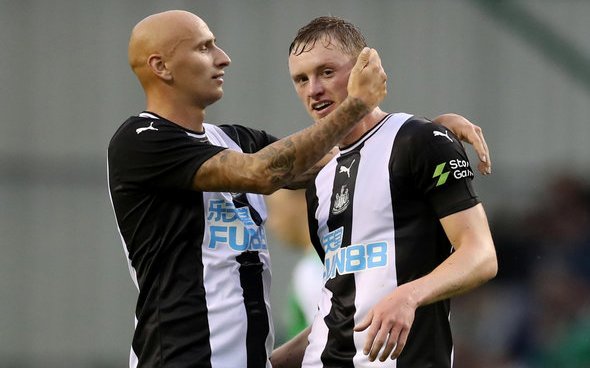 Newcastle United have plenty of concerns in the present, despite their relatively reasonable start to the new Premier League season.

New head coach Steve Bruce is still dealing with a fanbase that was ambivalent – at best – to his appointment, and he’s working to try and mould this Magpies squad into his image.

If you ask the former Sheffield Wednesday boss who the Newcastle player he most wants to build around for the future is, though, the chances are his answer would be young midfielder Sean Longstaff.

However, many of the Toon Army will surely have been left shaking their heads on Monday after ESPN FC reported that the 21-year-old is on Manchester United’s wish-list of young British transfer targets for the summer of 2020.

That’s news that no Newcastle follower will want to see, because we know the Red Devils have already tried to sign the Englishman once already. The Daily Mirror reported as much in July.

Although Longstaff hasn’t started this campaign in quite the sparkling form that he displayed last time out, it must be remembered that he is still a young man making his first forays into first team football. Besides, he is still arguably the most crucial member of Bruce’s squad.

To be fair, he’s not been terrible either. It’s all relative. As per WhoScored.com, the youngster is averaging a key pass, 0.5 crosses and two long balls per game. He needs to improve in possession, it’s true. His pass success rate of 77.1% isn’t exactly stellar, while his one successful touch per outing is poor.

Yet the potential he has is undeniable and is why a team like United is looking at him. However, the Newcastle fans will be hugely keen for their team to resist any approaches for him next summer.