They say that you should never judge a book by its cover, and while that may be true, it doesn’t mean that it isn’t still important to look good. And that appears to Mike Ashley’s latest approach to ownership on Tyneside, or at least it is with regards to the work he is having done at St. James’ Park. The controversial businessman may be running a pretty rotten operation in the boardroom, but you almost have to admire the way in which he has decided to just paint the outside of his stadium as a means of distraction. To be fair, it actually looks alright. A massive monochrome mural of supporters getting behind the Toon Army, as shown by this tweet from the Chronicle, it really is an impressive piece of art. But it seems odd that Ashley would be so willing to pour his money into boondoggles like this instead of injecting funds where they are needed most. Ordinarily, you might praise this as a nice initiative from a club owner who is trying to get fans back on board, but whenever Ashley is involved in a ploy it is hard not to view things with a modicum of cynicism. 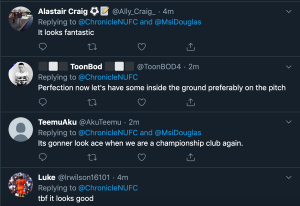