Newcastle United fans must be beginning to wonder whether the Saint in Allan Saint-Maximin actually means he is canonised. The Frenchman hasn’t been on Tyneside too long, but he has already won fans over, visiting food banks, talking up his love for the area, and now, out of nowhere, taking it up on himself to act as a mediator between Toon legend Alan Shearer and Michael Owen. The English duo had a bit of a spat on Twitter on Tuesday after Shearer essentially accused the former Ballon d’Or winner of failing to try his hardest during his spell at Newcastle, and Owen responded in kind by suggesting that the Toon hero had once tried to force through a move to Liverpool. It was all very messy and a little bit petty, but Saint-Maximin took it upon himself to try and smooth things over. Replying to Owen’s tweet, he sent a gif of John Lennon with the caption: “Make love, not war, that’s all we’re saying”. And the Toon Army loved it. He may be sidelined at the moment, and he may have barely kicked a ball in black and white, but if he can play half as well as he acts as a diplomat, then he is likely to be a very popular addition for the club. 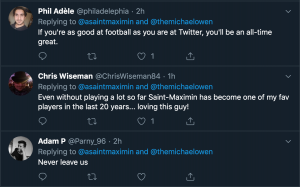