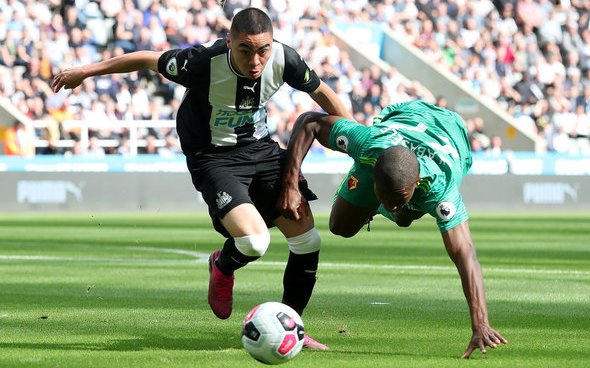 Miguel Almiron finally scored his first goal for Paraguay on Tuesday when he bundled the ball into the back of the net in a 4-2 win against Jordan an international friendly. So it is no surprise to see some Newcastle United fans delighted for the 25-year-old on Twitter as he is yet to score a goal for them and this seems to have given them a lot of hope. While it is very unlikely that he will score a hat-trick against Liverpool on Saturday when they meet at Anfield in the Premier League, as one fan suggests, the confidence of that goal against Jordan could do the world of good for the former Atlanta United ace, who is yet to score or register an assist in 14 appearances in English football. Joelinton appears to be improving his performances every week up front so even if Almiron can set up a goal for the Brazilian striker in the coming weeks, that will be massive progress.

Almirón scores scored his first ever international goal for Paraguay tonight. May he get his first goal for #NUFC at the weekend… https://t.co/t2JX8xIhQQ

Talented lad but seems to be a bit of a drama queen.

Was pleased to see Almiron notch against Jordan. They both definitely have their knockers, so good night all round!

Almiron grabbing his first Paraguay goal to then come grab his first for Newcastle, love to see it

Almiron scored for Paraguay, hopefully he can get his first goal for Newcastle soon. Once he gets that first goal he’ll become unreal and we’ll see the best of him #NUFC