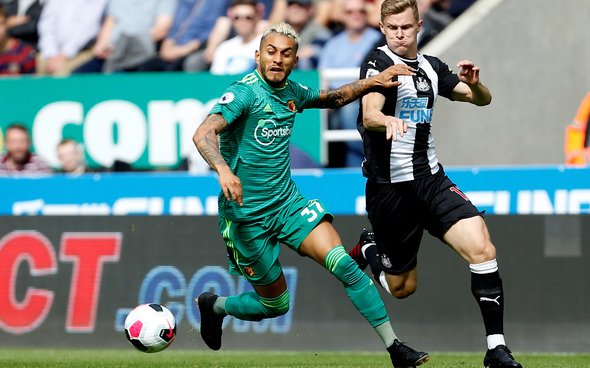 Emil Krafth has been described as “nothing special” and “bang average” by some Newcastle United fans on Twitter after failing to do much of note in his first few appearances for the club. Steve Bruce signed Krafth, 24, from Amiens in the summer transfer window and he has already started to look like a regular starter having started in the last three Premier League fixtures in a row. The Sweden international played well in the 1-0 win against Tottenham before putting in a steady shift in the 1-1 draw against Watford at St James’ Park on Saturday. It was Krafth’s home debut in the league for the Magpies and according to stats by WhoScored he was able to complete 81 per cent of his passes, make one clearance and make one interception. It was a fairly quiet afternoon for the Swede but he was there and he did not do a lot wrong. There is a lot of competition for a starting spot at right-back with Javier Manquillo and DeAndre Yedlin still in the squad. He might need to do a bit more to impress some of these fans if they want to view him as the undisputed first-choice in that position.

Krafth is no better than yedlin/manquillo…

i have the same reaction watching Emil Krafth https://t.co/JKoFwSCXZ1

Agreed. I’ve been really pleased with him this season.
However, some of our passing is really poor & without much thought about the next phase; pretty mindless sometimes. Krafth needs to believe in himself more and get past the halfway line. Manquillo did better when he came on.

Can’t wait to see what Yedlin and ASM can bring to our team when fit. Don’t mind Krafth but offensively he ain’t the best

Steady and dependable. Nothing risky, nothing spectacular

He’s just a right footed dummet. Nothing special but does the job