Only five games into the new season, this contest already has the look of a pivotal one. With that said, and considering the Magpies’ lack of firepower thus far, Bruce may well opt for the burly England international.

The Shields Gazette reported last week that the Seagulls clash was Carroll’s likely return date from injury, and so a formation switch, with him partnering Joelinton up front, makes perfect sense.

Christian Atsu would be the unfortunate party to drop out for the 30-year-old, while Javier Manquillo should replace the hapless Emil Krafth at right wing back. Those two changes could be enough for Bruce’s team to outclass the Sussex side.

In between the sticks, Martin Dubravka remains the number one choice. Yes, he made a grave error against Liverpool last time out, but he is still streets ahead of back up Karl Darlow and must start here.

As mentioned, Manquillo is the man on the right hand side of the defence. On the left? There’s only one choice after his stunner against the Reds at Anfield: it has to be Jetro Willems.

Now, a midfield three would be needed to accommodate a two-man frontline. That means both Jonjo Shelvey and Isaac Hayden must keep their places, with the tireless Miguel Almiron getting the nod just ahead of them in a number 10 role.

That leaves Carroll and Joelinton to lead the line together. The former Hoffenheim man desperately needs some help, and if Carroll can give Bruce an hour against the Seagulls then he has to start. If it doesn’t work, slot Atsu back in and return to standard procedure. 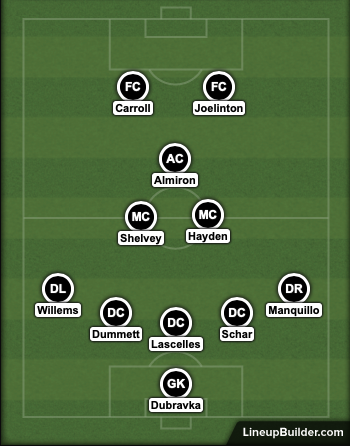