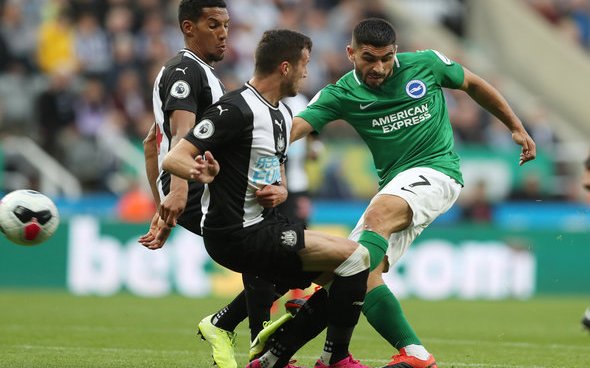 There’s no disputing the fact that Newcastle United’s summer signing Emil Krafth has suffered a dreadfully disappointing start to his Magpies career.

So much so that the Sweden international lost his starting spot to right wing back Javier Manquillo against Brighton & Hove Albion on Saturday.

And, after the performance of the 25-year-old against the Seagulls, in which he was a rare bright spot, Krafth has surely now been consigned to starting eleven exile moving forward.

Look, this wasn’t a world class performance from the Spaniard, but you have to look at things in context. This was a turgid effort from Newcastle in their goalless draw with Graham Potter’s side, but Manquillo more than held his own on the right hand side of the defence, something can not be said of Krafth for the majority of this campaign.

Let’s take a look at the numbers, shall we? As per WhoScored.com, Manquillo made five tackles on Saturday, the most of any Magpies player. He also produced four clearances – the joint-second most in a black and white shirt – one block and one interception.

His WhoScored rating of 7.50 for the game tells you that he did alright. Yes, he could have contributed more from an offensive point of view, but like the rest of his teammates he was hamstrung by Steve Bruce’s baffling lack of tactical preparation.

When you compare Manquillo’s display at St James’ Park to what Krafth has achieved so far this term, it’s clear that the former Atletico Madrid man is the superior option at the moment.

As per the same website, the summer recruit is averaging a tackle, 3.3 clearances, 0.5 blocks and 0.8 interceptions per game this season.

The numbers don’t lie, and neither does the eye test. Not only does Manquillo look like a safer pair of hands, but the statistics back him up as well.

With that said, it’s looking like a long journey back to the starting line up for the former Amiens man. After what Manquillo produced on Saturday, the Swede could be in trouble.