Paul Dummett has evolved since being transformed into a central-defender at Newcastle United.

Primarily a left-back, the Welsh international moved into a central role in a back three under Rafael Benitez, and he has more than excelled at St James’ Park since.

Alongside Jamaal Lascelles and Fabian Schar, Dummett has become a mainstay in the Magpies’ side in the past couple of seasons, starting the Premier League season in great form.

The 27-year-old produced a Man of the Match performance in the 1-0 win over Tottenham recently, absorbing all of the pressure Spurs threw at him and his teammates in the capital.

Starting all four games so far under Steve Bruce, Dummett has averaged two tackles and a couple of interceptions per game according to WhoScored, but most impressively has averaged five clearances in each outing.

His performances have warranted big compliments from the likes of Benitez and Lascelles, with the Magpies’ captain claiming the Welshman is highly reliable when speaking to The Athletic.

“Dummy is so reliable,” he said.

“He’s just so consistent with his performances. Dummy is such an important player for us. He’s quite similar to me: we might not be the most pretty of footballers, but Dummy is reliable and you need people like that in your team.”

When comparing Dummett’s performances this season compared to the last campaign via WhoScored, it is clear to see the improvement of the defender. 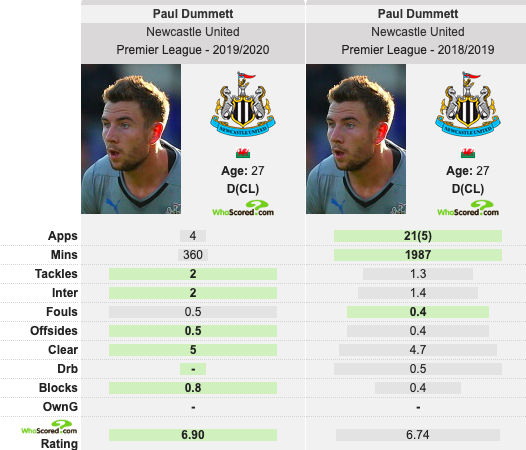 Dummett has been exemplary this season in the heart of the defence, averaging more tackles, interceptions, clearances and double the number of blocks so far under Bruce.

The 27-year-old has not been dribbled past by an opponent so far this season, and if he continues with this type of form, the clean-sheets will start to come for the Magpies.

Lascelles is right to heap praise on Dummett, with the Welsh international now an integral part of the Newcastle defence after his emergence in the past year.