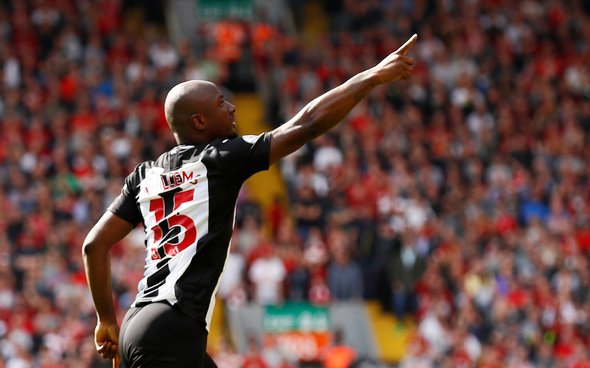 Chris Kamara was blown away by Jetro Willems’ “brilliant” goal in Newcastle United’s 3-1 defeat to Liverpool on Saturday afternoon.

Willems stunned Anfield with a cracking goal in the first half but unfortunately for the travelling Toon Army, Steve Bruce’s side failed to hang onto their lead and ultimately returned to the North-East later in the day with nothing to show for their trip to Merseyside.

Kamara was at the AMEX Stadium on Saturday covering Brighton’s match against Burnley and he has revealed what was being said about Willems’ goal in the press room on the south coast.

However the former Bradford manager fails to agree with claims that were made about Liverpool goalkeeper Adrian.

“What a goal from Willems,” said Kamara on Sky Sports’ Goals on Sunday [11:52am]. “Absolutely brilliant.”

“I heard one or two people yesterday in the press box at Brighton’s stadium saying the goalkeeper’s gone with his wrong arm. No, not a chance.

“What a decent goal that is.”

Adrian could not have done much better to stop Willems scoring that goal other than being a few inches taller because he was never really going to reach it. Willems just seemed to get the ball out of his feet so quickly before absolutely hammering the ball into the back of the net in front of the travelling Geordies. Trent Alexander-Arnold probably should have done a bit better because the England right-back was outskilled by a player who has not exactly had the best starts to life in English football since switching the Bundesliga for the Premier League in the summer. Willems will be delighted with that goal and the Newcastle fans should be too because it bodes well for the coming weeks when the Dutchman will be in the starting line-up due to Matt Ritchie’s injury. Ritchie is a good player but he probably couldn’t have pulled off a piece of skill and a shot like that.