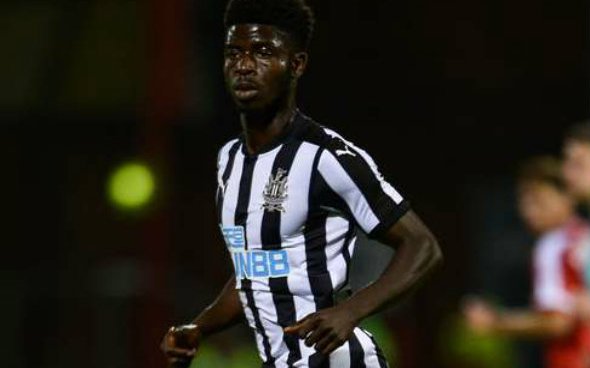 Craig Hope has admitted he was very impressed with the performances of Newcastle Under-23’s duo Mo Sanagare and Jack Young on Monday night.

The Daily Mail journalist confirmed that Steve Bruce was in the crowd to watch Neil Redfearn’s side pick up all three points with a 3-2 victory over Norwich City.

Hope singled out the midfield pairing for their performances against the Canaries on his personal Twitter account after the match, claiming he had rarely seen a youth game with such intensity.

“Rarely seen an U23s game with such high intensity,” he wrote.

Redfearn’s side were in need of the win after a poor start to the campaign, where they had only won a single game from their opening five fixtures.

With Bruce in attendance at the game, all of the academy players will have been determined to put on a show in front of the boss. The young Magpies strolled into a 2-0 lead in Northumberland, but in true Newcastle fashion, they found themselves level in the game midway through the second-half when they should have been comfortably ahead. Sangare has been everpresent in the heart of midfield for Redfearn’s side and brings international experience after recently earning two caps for Liberia – something he will be looking to help his teammates within games with. Young made the step up to the under-23’s from the under-18’s at the beginning of this season and clearly has taken to it like a duck to water, impressing in holding midfield where he can get on the ball and dictate play. With the midfield duo impressing, Bruce will have one eye on their progress as the season continues – with the youngsters surely motivated by the recent success of the Longstaff brothers.