Whenever a player falls out of top form it’s always interesting to wonder at the reasons why. What has caused them to diminish from the peak of their powers?

Often the answer is simply advancing age, but in the instances of players like Saido Berahino and Ravel Morrison, it’s clear that that is not applicable.

A similar debate has surrounded Newcastle United striker Andy Carroll over recent years, with injuries typically being used as the main reason for him failing to fulfil the potential he showed in his first spell at St James’ Park.

However, talkSPORT duo Adrian Durham and Darren Gough have a different theory, with the former telling talkSPORT [20/09; 16:55] that: “He possibly hasn’t helped himself off the field, as well – revelations that he’s not really that interested in football.”

To which Gough replied: “Back home, I think that might make a difference. If, as you say he lost his love for football, going back to Newcastle and Newcastle… I think he might have just rediscovered that touch.”

Newcastle fans will certainly be hoping that that proves to be the case. Carroll was brought back on a highly incentivised contract this summer, meaning he was a low-risk addition, but given the team’s struggles going forward this season, there is suddenly plenty of responsibility on his broad shoulders.

Gough and Durham’s take might just be spot on, though, with what the former England cricketer says being particularly prescient. The 30-year-old being back home might be just what he needs to rediscover his best form. Although whether he will ever get back to what Durham termed his “spectacularly brilliant” best remains to be seen.

That best form occurred in his previous time in the north east, where his six month stint in the Premier League during the 2010/11 season earned him his big money move to Liverpool.

When you compare what he did then to how he played in his final campaign with West Ham United last time out, the difference is stark.

As per WhoScored.com, not only did Carroll play more minutes, score way more goals and grab more assists; but he was also up in his average shots, key passes and dribbles per game. He was also fouled 1.6 times a game rather than 0.7, showing that the opposition had more respect for his talent then.

To be fair, he has improved in his usage of the football. The number of his unsuccessful touches, how often he was dispossessed and the number of times he was offsides have all gone down from nine years ago.

Obviously it’s not a direct comparison given all that has happened to Carroll between those two seasons, but the stats demonstrate that there is a chance that Gough’s ‘Newcastle factor’ theory could prove to be correct this term. 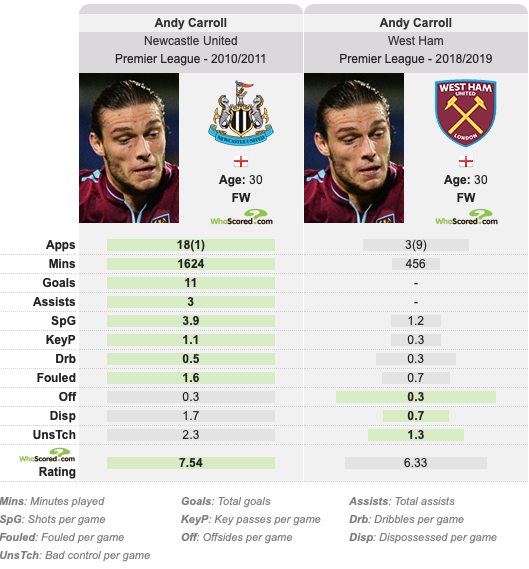