Newcastle United keeper Rob Elliot has joked that he should play outfield in his latest Instagram post.

Elliot shared the post on Wednesday evening, claiming that Magpies’ boss Steve Bruce should bring him off the bench in the final five minutes of games.

The 33-year-old Irish international posted the picture on his personal Instagram account, despite failing to make a single appearance for the club last season. 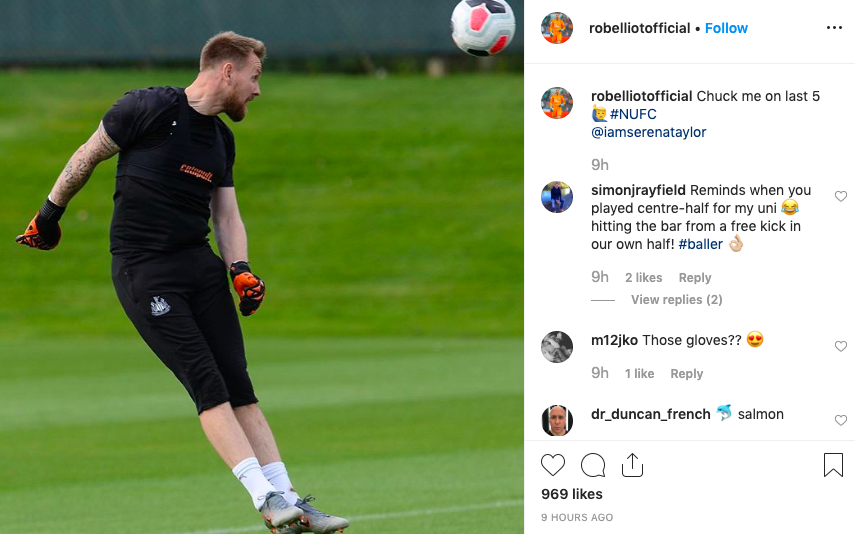 Joining the club from Charlton in 2011, Elliot has struggled for consistent game time at St James’ Park, only making a total of 68 appearances in between the stick, conceding 103 goals, and has had to settle for a place on the bench behind Martin Dubravka in recent years.

Even though Newcastle have failed to score more than one goal in their four separate fixtures so far this season, Steve Bruce won’t be calling on Elliot any time soon. The same can be said for his chances in goal, with Dubravka in sensational form since arriving, limiting his chances of featuring for the Magpies at any point this season. Failing to make a single appearance in an entire season will no doubt hurt Elliot, but the £25,000-a-week stopper [Spotrac] seemed in good sorts ahead of the weekend trip to Anfield to face Liverpool. The 33-year-old has never really hit the ground running since arriving from Charlton, conceding 88 Premier League goals in 52 games – not really a strong record. With his chances limited, Elliott appears to have started to take the fun approach to training, recognising his role is mainly support and that without an injury to Dubravka, he has more chance of leading the line than replacing the Slovakian.