The internet was broken on Tuesday as former England and Newcastle colleagues Shearer and Owen went head to head over Owen’s comments about his time at the club in his new book.

However, Edwards has backed Shearer after Owen suggested he’d tried to engineer an exit to Liverpool while at St James’ Park: “Actually, Robson offered Shearer to Liverpool and he didn’t want to leave,” he wrote on his personal Twitter account.

“I remember it quite vividly as I was in Hong Kong and Bangkok when it was all going on. Robson and Shearer smoothed things out. It wasn’t a great time for all concerned.” 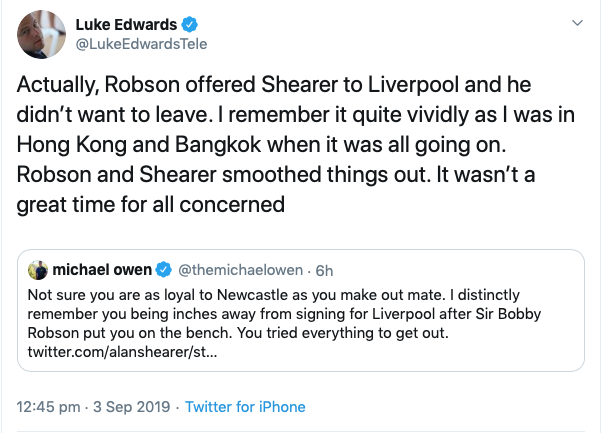 You can see the comments Owen made just above, claiming that the Magpies legend wasn’t actually as loyal to his boyhood club as he makes out. However, Edwards – an impartial journalist – has presented a rather different set of events to Owen’s. Edwards has no reason to lie or prevent half-truths, although he obviously wasn’t directly involved in the actual negotiations. Still, he was covering the team and clearly remembers Sir Bobby Robson trying to shift Shearer to Liverpool after a falling-out and the player refusing. Owen, contrary to Edwards, would have reason to varnish the truth somewhat. Shearer came at him hard after the comments in Owen’s new book were revealed on Tuesday, and so he was likely looking for some way to come back at the Newcastle great. That’s not to say he was lying exactly, but perhaps he has a warped recollection of the events. Edwards, on the other hand, is much more impartial.