When judging whether Newcastle United have improved from last season or not, it’s good to take a look at the variety of factors that have changed at St James Park over the summer.

Beloved former head coach Rafael Benitez has gone, to be replaced by former Sunderland boss Steve Bruce, while the cash was splashed on a few big money additions during the transfer window.

And it’s one of those new recruits who journalist Mark Douglas feels will be the key to assessing whether Newcastle have improved or not: “I think we can only make a true judgement when Allan Saint-Maximin returns from injury,” he wrote in a Chronicle Q & A [11/09; 15:32] when asked if the Magpies had got better.

That’s a lot of pressure to put on one man, no? The judgement on whether Bruce’s team have taken a step forward rests entirely on how the side look when Saint-Maximin is playing? Phew. Good luck, Allan.

Luckily for the 22-year-old, in the past he has shown hints that he is good enough to carry that burden. Consistency has always been an issue for him with former club Nice, but he is certainly capable of setting this Newcastle attack alight.

When you compare what he achieved last season in Ligue 1 to what his fellow Magpies attacking midfielders Miguel Almiron and Christian Atsu have done so far this term, it appears hugely evident that Saint-Maximin can make the difference on Tyneside.

As per WhoScored.com, the Frenchman scored more goals and grabbed more assists – not surprising at this stage – but also thrashed both men in shots and dribbles per game, while being caught offside far less often.

So he is someone who has the pedigree to live up to Douglas’ billing, but the Newcastle correspondent hasn’t made it easy for the winger, that’s for sure. 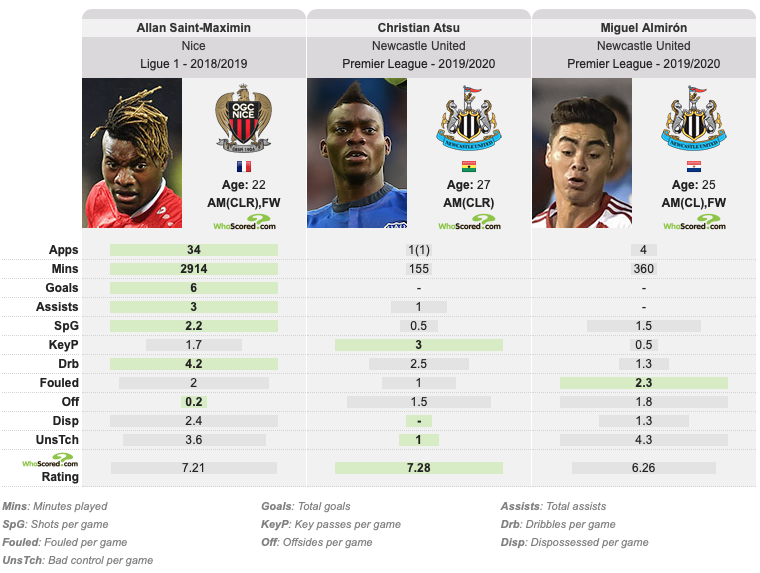